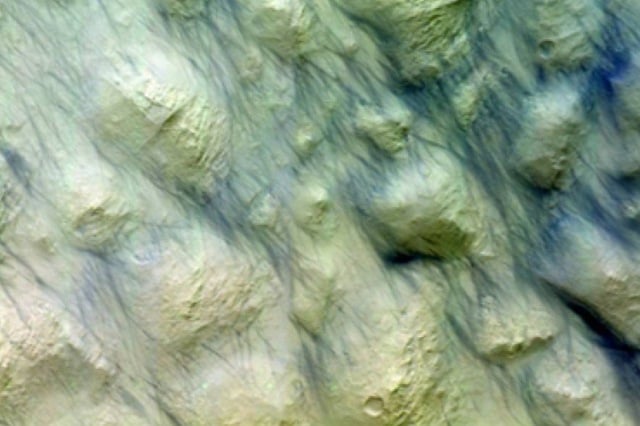 The image was captured on September 2nd by the Colour and Stereo Surface Imaging System (CaSSIS) which is on board the ExoMars Trace Gas Orbiter 400 kilometres above the surface of Mars.

It shows dark streaks which researchers believe could be dust devil tracks left by a recent dust storm that swept across the entire planet. Earlier images of the region captured by NASA’s Mars Reconnaissance Orbiter before the dust storm do not contain these streaks.

Read also: Why scientists are building a 'Martian garden' in Switzerland

The storm reduced light levels on the planet so significantly that NASA’s solar-powered Opportunity rover was out of action for three months.

The CaSSIS was also offline for a long period although it has been fully operational again since August 20th, the European Space Agency (ESA) said in a statement.

A composite image of the Korolev crater. Photo: ESA/Roscosmos/CaSSIS

The CaSSIS was designed by an international team guided by the University of Bern. It has been sending through extremely high-resolution images of Mars since earlier this year including the stunning composite image of the Korolev crater seen above, and that of the recent dust storm (below).

A dramatic image of the Mars dust storm captured in April.Photo: ESA/Roscosmos/CaSSIS

The ExoMarsTrace Gas Orbiter, a joint project of the ESA and Russian space agency Roscosmos aims to create the most detailed inventory yet of Martian atmospheric gases.

The CaSSIS is assisting by capturing images of surface features that could be related to trace gas sources.

Preliminary data obtained by the orbiter and CaSSIS suggest both high levels of radiation and dust storms would be major difficulties in any future crewed mission to Mars.