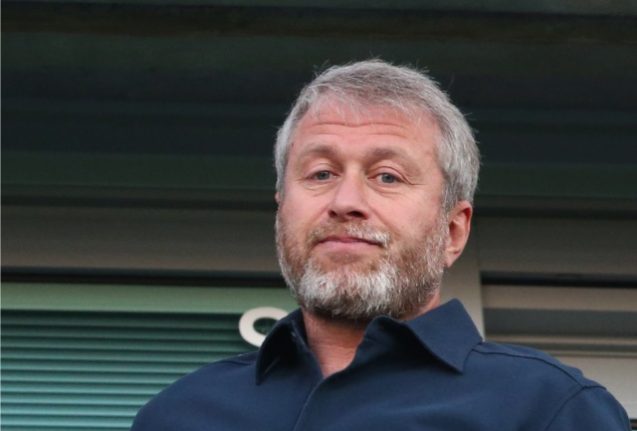 Roman Abramovich's lawyer said a request for correction of facts had been filed with Swiss Federal Police. File photo: AFP

The saga surrounding the Chelsea owner's attempt to relocate to the country was first reported by the Tribune de Geneve (TdG) newspaper, which claimed Abramovich was turned away after Swiss police claimed he posed a security risk.

In a rare move, the TdG newspaper published the article in both French and English, highlighting Abramovich's high profile internationally. The story was also published in English by other newspapers in the Tamedia group, which owns the TdG,

Abramovich had applied for residency in Valais canton, which includes the luxury ski resort of Verbier, Jacques de Lavallaz, the head of the cantonal migration service, told the AFP new agency in an email.

“The (federal) secretariat of migration was going to make a negative decision but Mr. Abramovich's representatives withdrew their client's application before a decision was issued,” de Lavallaz said.

The migration secretariat's decision was based on an analysis conducted by Swiss federal police, de Lavallaz explained, without discussing details of their conclusions.

He stressed that the application was withdrawn before a final decision was rendered.

According to the TdG, Abramovich applied to move to Verbier in 2016.

The newspaper said that police argued he was linked to “alleged money laundering and alleged contacts to criminal organisations.”

Police claimed “that Abramovich's presence in the country would constitute a reputational risk for Switzerland – and possibly even a public security risk,” the newspaper further reported.

The newspaper also posted a statement from an individual identified as Abramovich's lawyer, criticising Swiss officials and the release of his personal information.

“We have filed a request for correction of facts to the Swiss Federal Police and will be filing a criminal complaint against unknown persons responsible for dissemination of this confidential information,” the lawyer, Daniel Glasl, said in the statement.

“Any suggestion that Mr. Abramovich has been involved in money laundering or has contacts with criminal organisations is entirely false,” he added.

It also noted that Abramovich has no criminal record.

The TdG said Swiss police raised concern over a commodities trading company that had been controlled by Abramovich called Runicom, which was the subject of a money laundering investigation by Geneva prosecutors in the 1990s.

Glasl stressed that the company was “long-ago cleared of any wrongdoing.”

The TdG said that Switzerland's federal court gave it permission last week to publish the story, after a seven month legal battle with Abramovich's lawyers.

Abramovich, who bought Chelsea in 2003, was granted Israeli citizenship earlier this year after the British authorities reportedly delayed approving a visa for him.