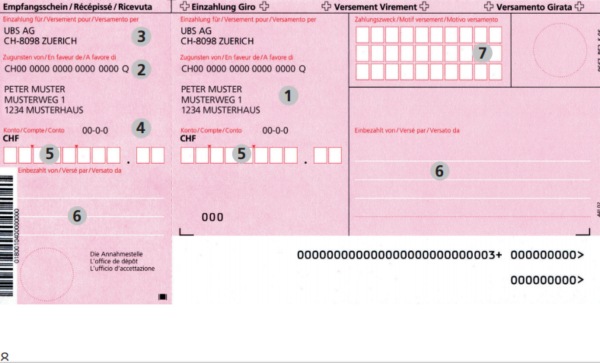 For many people, Switzerland’s low-tech payment slips – which are used to pay bills and transfer money between accounts – are as Swiss as SBB railway clocks and yellow hiking path signs.

But after 20 years, the classic slips are on borrowed time.

The new payment slips will be gradually rolled out from mid-2020. Photo: SIX

The current suite of seven different orange and pink documents will be replaced by a single black and white version (see image above) containing a Quick Response (QR) code, Swiss financial services company SIX said in a statement on Thursday.

The QR code will enable payment slips to be read electronically by smartphones and other devices so that payment information can be sent directly to financial institutions using online banking.

Currently after receiving a bill (whether in the post or electronically) in Switzerland, you have to manually type in payment details into your online banking interface – or visit a post office, something which remains a surprisingly common practice (one in four bills are still paid this way).

The classic green payment slips were in circulation from 1906 to 1986. Image: Verlag SKV, Zurich.

In fact, with the new model payment slips, people will still be able to pay by going into the post office. But SIX have also warned that people will not be able to print out bills received electronically in PDF format and then use these print-outs at the post office as the process of printing the bills can change their QR formatting.

The new black and white slips will be introduced from mid-2020, gradually replacing the current version from then on.

The pink and red slips remain valid and no date has been set for their final curtain call.

Switzerland’s payment slips represent a century-old tradition (see the picture above) and an estimated 800 million are processed every year.

But their replacement with a single document is part of a major overhaul of the payment transaction process in Switzerland which will also see proprietary Swiss account numbers replaced by IBAN numbers.

This harmonization of processes is partly being carried out to ensure money is easier to track, in line with the Swiss Federal Act on Combating Money Laundering and Terrorist Financing.