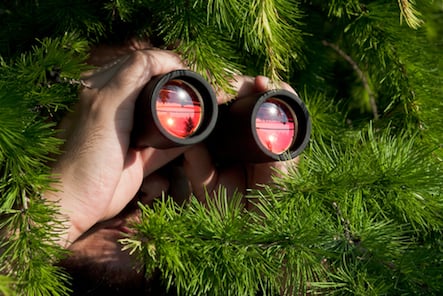 But imagine if the snoop is a private detective hired by your insurance company to investigate whether you are a welfare cheat.

That scenario has divided opinion ahead of a Sunday referendum in Switzerland, part of the country's direct democracy system, where voters will decide on legal amendments establishing the type of surveillance insurance companies can use.

A revised law passed by the government in March gives insurers broad leeway to spy on potential fraudsters.

It appears set for approval with nearly 60 percent support, according to a survey conducted this month by the GFS Bern polling and research group.

But critics of the legislation who secured the signatures needed to force Sunday's vote say the measures do not prohibit serious, unjustified invasions of privacy.

But that stopped following a 2016 ruling at the European Court of Human Rights.

In a 6-1 decision, the Strasbourg court agreed with a Swiss plaintiff who claimed her insurance company's spying breached privacy rights.

The plaintiff, Savjeta Vukota-Bojic, was struck by a motorcycle in 1995. A decade later, her insurer requested that she undergo fresh medical examinations to assess if she still deserved full benefits.

When she refused, her insurer hired detectives to watch her before cutting her benefits by 90 percent.

Swiss courts said the spying was legal, but the European court disagreed and specifically criticised Bern for being “insufficiently precise” about the type of surveillance permitted.

“Honest recipients of insurance benefits have no reason to worry. Their insurance benefits remain untouched. They are not monitored,” Mauro Tuena, lawmaker for the rightwing Swiss People's Party, wrote in an op-ed for public broadcaster SRF.

But Silvia Schenker, a lawmaker with the centre-left Social Democratic Party, argued the amendments were hastily written under pressure from insurance industry lobbyists and lacked “legal clarity.”

Also writing for SRF, she stressed that the law does not expressly prohibit companies from recording people in private spaces.

“Lawmakers chose this wording deliberately,” she argued. “If they wanted to limit the space where surveillance is possible, they would have done this.”

The law allows companies or their detectives to record and film people in public places and in private settings visible from a public place, like a balcony.

Firms do not need official approval to conduct surveillance, but only require “concrete indications” of false claims.

Schenker agreed on the importance of curbing fraud, but warned that companies have repeatedly in the past unjustly spied on people with valid insurance claims.

“If parliament wants to permit the surveillance of insured individuals, it must define the limits and requirements clearly and unambiguously,” she said.

Another measure on Sunday's ballot envisions a Switzerland where the insurance espionage debate might never have emerged, because the European rights court rulings would not supercede decisions by Swiss judges.

The “Swiss Law First” proposal, backed by rightwing groups, calls for domestic law to be placed above international law.

Recent polling suggests the measure will be rejected, with the government opposed and surveys indicating voters are concerned about reputational damage to Switzerland.

It “not only hurts Switzerland's reputation, it also causes concrete problems, especially for the Swiss economy,” Berset said.

“Switzerland has over 600 economic agreements that allow us to export to other countries,” said Oliver Steimann, of the business lobby group economiesuisse, who is against the proposal.

If those deals are threatened because Switzerland rebukes international law, “it would threaten the country's success as an exporting nation,” he told AFP.