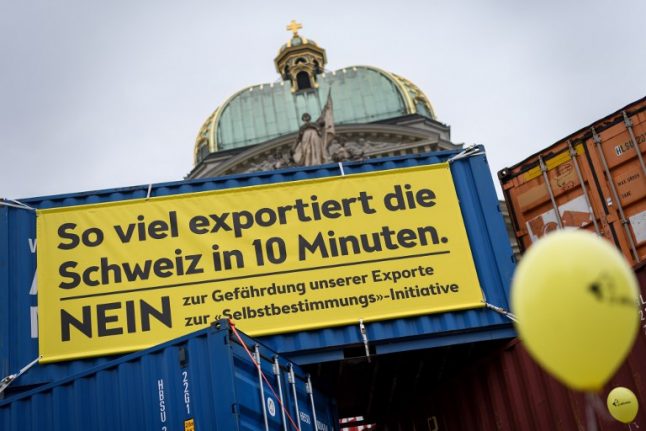 A container displayed by Swiss economic association Economiesuisse with a banner reading: "This is how much Switzerland exports in ten minutes".Photo: AFP

A huge 66.2 percent said no to the initiative which would have seen the Swiss constitution take precedence over international law in almost all cases.

Read also: What you need to know about the 'Swiss law first' initiative

Not a single canton voted in favour of the initiative. The highest figure was achieved in the canton of Schwyz, where 47.1 percent of voters backed the initiative. At the other end of the scale, just 22.5 percent cast their ballots for the initiative in Neuchâtel.

The size of the victory stunned even the “no” camp.

“I expected a ‘no’ but the clarity [of the result] was a surprise,” said Socialist MP after the results came through.

Switzerland’s Blick newspaper called the result a “rout” and a “slap in the face” for the SVP.

It framed the defeat as the latest in a long line for the party which has failed to gain any traction since gaining a major victory in 2014 when Swiss voters backed the party’s mass immigration initiative which aimed to introduce quotas on immigration from the European Union.

Blick also described the result as a defeat for SVP President Albert Rösti and his “less aggressive” style. The party had only managed to win an average 37 percent of support for its initiatives in the 10 referendums since he took on the top job, the paper noted.

Meanwhile, Le Matin newspaper noted that “since the earthquake of 2014 [with the mass immigration initiative”], a certain part of Switzerland won’t let itself by taken by surprise by the SVP's game”.

The Tages Anzeiger took it a step further and noted opposition to the SVP had become highly organised in the last few years.

Some 70 organizations had worked together to defeat the ‘Swiss law first’ initiative, the Zurich daily said. It noted the key role of the stark + vernetzt platform comprised of key business players including Economiesuisse and the Swiss Bankers Association.

This platform had worked successfully alongside groups including Operation Libero, a political movement which campaigns for a Switzerland which is “open to the world” and “focused on the future” to ensure the SVP was unsuccessful on Sunday.

Economiesuisse director Monika Rühl said opponents had worked closely together to ensure that different messages were sent out at different times.

“Sometimes there was a week of economic arguments and then it would be about human rights,” she said.

But the Tribune de Genève sounded a note of caution for those who might view the result as an indication that Switzerland is about to embrace Brussels.

“The vote does not constitute a declaration of love for a European Union which is in the middle of a crisis,” the paper said.