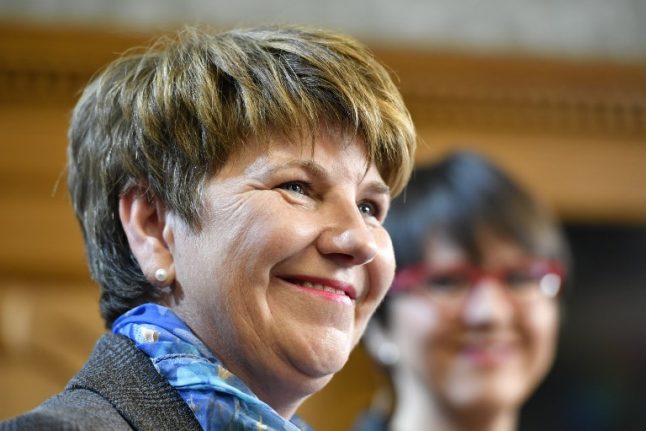 Has Viola Amherd been sidelined after being named to head up the defence ministry? Photo: AFP

The complicated reshuffle of the seven-member Swiss executive will see Amherd, who was elected as one of Switzerland’s two new federal councillors last week, take over the defence ministry top job from Guy Parmelin of the right-wing Swiss People’s Party (SVP).

Parmelin, a master farmer and winemaker, will now head over to lead the economics ministry thus taking up the post being vacated by outgoing federal councillor Johann Schneider-Ammann (Liberals/FDP).

This will see Parmelin involved in thorny negotiations with Europe over labour rules in relation to a new Swiss-EU framework deal.

In other changes, Switzerland’s other new federal councillor, Karin Keller-Sutter of the centre-right Liberals (FDP), will take over the justice ministry from Simonetta Sommaruga of the left-wing Socialists (SP).

Meanwhile, Sommaruga will take over at the head of Federal Department of the Environment, Transport, Energy and Communications from outgoing minister Doris Leuthard (Christian Democrats/CVP).

The only three positions in the Federal Council to remain unchanged are those of foreign affairs minister, where Ignazio Cassis of the FDP will remain in change, finance minister (where the SVP’s Ueli Maurer remains in the top job) and Alain Berset, who will continue to head up the home affairs ministry.

After the changes to the Federal Council were announced, Swiss media outlets declared the Socialists had been the big winners on the day after Sommaruga walked away with the key energy and environment ministry. The role will see her heading up the privatization of the Swiss electricity market and overseeing a planned huge reduction in CO2 levels by 2030.

The SVP was also considered to have done well in shedding the defence ministry in favour of the higher-powered economics ministry.

But the CVP, which has only one seat on the Federal Council and which is struggling in the polls, was declared a loser in the shuffle after it lost its own grasp on the energy and environment ministry and Amherd was assigned the difficult job of leading the scandal-hit defence ministry.

On her to-do list will be the tricky task of convincing the Swiss people to buy new fighter jets with a price tag of eight billion Swiss francs (€7.12 billion). The Swiss are set to vote on whether to give the go-ahead to spending this money in a referendum to be held by 2020 at the latest.

Outgoing defence minister Parmelin, who only spent three years in the role, expressed his frustration at the fact the ministry was considered to be second tier, but noted that after 23 years of SVP leadership at the ministry, a change of perspective could be useful.

His decision to move on was criticised by the Tages Anzeiger daily, which stated he had clearly lost interest in the job and was under pressure from his own party to leave the position when staying on would have shown more leadership.

The CVP President, Gerhard Pfister, reacted to the news of Amherd’s appointment by saying the holding of the defence ministry “was, for the party not bad in itself”.

Speaking to the Blick newspaper, he noted that leadership of the defence ministry was a “Herculean task” and that the “people there are totally resistant to reform”.

But he noted Amherd now had a chance to “tidy up” the ministry that had been led by the SVP for a long period.

He added it might be good to have a woman at the head of the defence ministry because it could help bring the ministry into the 21st century.

However, Pfister also used his interview with Blick to express his disappointment with the fact that the dividing up of ministries among Federal Council members had not been carried out without the need for voting.

Switzerland’s seven-member executive is divided between the country’s four political parties under the so-called concordance system where compromise is the order of the day. Two seats on the Federal Council are set aside for the Socialists, FDP and SVP, and one seat is assigned to the CVP.

Ministers generally select the ministry they wish to head up based on seniority. But the latest reshuffle required two meetings and a vote, suggesting there was plenty of jockeying for position behind the scenes.

“That is not a good sign when it comes to working together in the Federal Council,” Pfister told Blick.