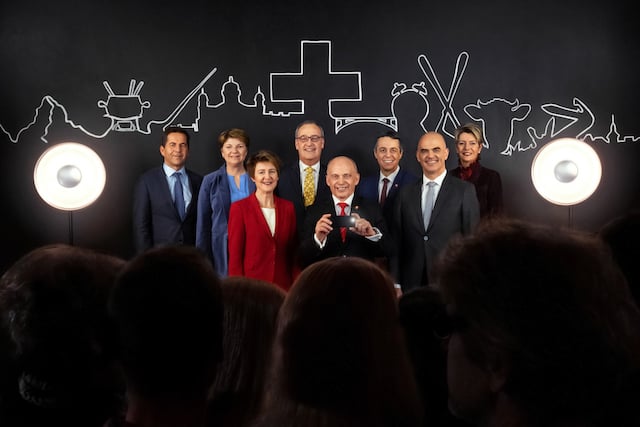 The photograph features all seven of Switzerland’s Federal Councillors and was taken by students at the Federal Office of Informatics and Telecommunications (BIT).

The above are all part of Switzerland's seven-member executive known as the Federal Council, responsible for policy on defence, national roads, energy and external relations, among other things.

The photograph is titled “Perspective Change”.

Although the student creators were allowed to plan and design all aspects of the entire image, Federal President Ueli Maurer’s one stipulation was that it had to be taken with a smartphone.

Traditionally, the President is allowed to act as “artistic director” for the project.

Maurer has said that he is proud of the students but reaction online has been more mixed.

READ MORE: 10 things you need to know about the Swiss political system

They explained that, as the photo features President Maurer taking a photo of Swiss citizens, they wanted to suggest that his focus (and that of the Federal Council) is on the people.

READ MORE: This is how Switzerland elects a new federal councillor

A new official Federal Council photo is taken and printed every year. This year, 45,000 photos were printed.

From January 3rd 2019, the photograph is freely available online – as are previous efforts dating back to 1993.