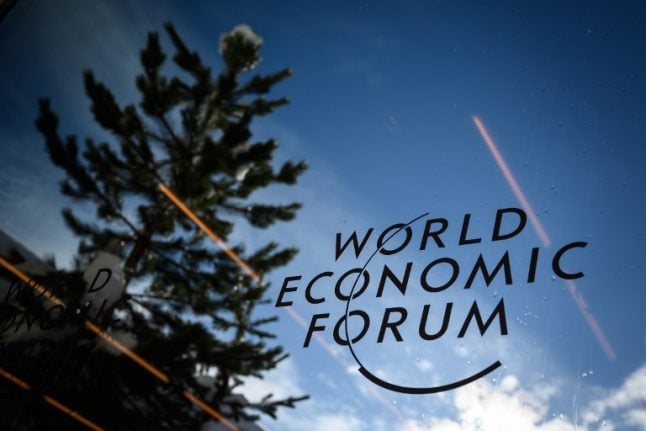 Photo: AFP
What’s the WEF?
The WEF was set up in 1971 in Geneva by social entrepreneur Klaus Schwab. Independent and not-for-profit, it aims to bring political and business leaders together to help them collaborate on global challenges and find solutions.
According to its 2017-18 annual report, the WEF’s revenue of 327 million Swiss francs (€288 million) went towards activities supporting engagement in the fields of digital economy, education, healthcare, IT, mobility, the environment and energy, among others.
What happens at Davos?
The WEF’s glitzy annual meeting, which runs from Tuesday to Friday this week, is being held for the 49th year. The gathering sees itself as the “foremost creative force for engaging the world’s top leaders in collaborative activities to shape the global, regional and industry agendas at the beginning of each year”.
At 1,560 metres above sea level, Davos is the highest city in Europe. Photo: AFP
In short, it’s a giant networking event for business and political leaders around the world to discuss the world's most pressing issues during the day and have a jolly good time at various parties, dinners and events at night.
Around 3,000 participants are expected for the 2019 edition, according to the WEF. They represent the worlds of business, government, international aid, academia, arts and culture, and the media.
However, just 22 percent of those participants are women – one percent up from last year.
Who’s going to be the 'star attraction' this year?

Brazil's new far-right president Jair Bolsonaro is expected to be the biggest attraction, in what will be his first international trip since his January 1st inauguration.

At the same time, Brazil's custody of the Amazon rainforest will be under particular scrutiny, after a new WEF survey found the Davos community worried most about climate change among sources of political and economic anxiety.

The survey highlighted fears of extreme weather patterns and the risk of disruption in an array of sectors including transport and logistics. On cue, heavy snowfall and deadly avalanches have hit the Alps this month, cutting off the train line to Davos at one point.

Like US President Donald Trump, Bolsonaro is a climate sceptic. His pro-business agenda and appointment of a like-minded rightwinger as environment minister have done nothing to ease concerns about deforestation in the Amazon.

The new leader of Latin America's largest economy will give the keynote address in Davos on Tuesday. He has vowed to showcase “a different Brazil, free of ideological ties and widespread corruption”.

Bolsonaro has also echoed Trump in bashing China, even as the world's second-biggest economy boosts Brazilian farm imports — sourced in part from cleared Amazon lands — as an alternative to US commodities in the midst of Trump's trade war.

However, Bolsonaro will be accompanied by his US-educated economy minister, Paulo Guedes, who speaks the kind of investment-friendly language that is music to Davos ears.

Who else will be attending?

German Chancellor Angela Merkel will be there, as will her Austrian counterpart Sebastian Kurz, and the presidents of Iraq, Afghanistan, Colombia, Peru, Rwanda, Uganda and Zimbabwe.

United Nations chief Antonio Guterres is going, flanked by the heads of the UN agencies for trade, labour, refugees and human rights, as well as the heads of the World Bank, the International Monetary Fund and NATO.

Read also: Has Davos actually made the world a better place?

Greta Thunberg, a 16-year-old environmental activist who made headlines last year after initiating a solo climate protest by striking in Sweden on every Friday in August 2018, will also attend.

Read also: Swedish teen named one of the world's most influential after climate campaign

Thunberg accused world leaders of behaving like irresponsible children for doing enough to combat environmental problems when she spoke at the climate summit in Poland (COP24).

What about the Swiss contingent?

The four Swiss ministers will be taking part of a large number of bilateral meetings, with Maurer alone set to take part in 20 such encounters. However, a hoped-for meeting with Donald Trump on a possible free trade agreement between the US and Switzerland will not go ahead after Trump announced he would not be attending.

Only three leaders from the Group of Seven (G7) countries said to be the most industrialised will be attending the WEF meeting.

Donald Trump attended last year and initially planned to return to Davos but, announced recently there would be no reprise of his visit, given he is currently engaged in a stand-off with Democratic MPs in the congress over funding for his much-touted wall along the US–Mexico border.

Because of the Democrats intransigence on Border Security and the great importance of Safety for our Nation, I am respectfully cancelling my very important trip to Davos, Switzerland for the World Economic Forum. My warmest regards and apologies to the @WEF!

UK Prime Minister Theresa May will also not attend. Instead she will be focusing on the political crisis at home after her Brexit Withdrawal Agreement was overwhelming rejected by British lawmakers and she narrowly survived a vote of no-confidence launched by the opposition Labour party.

Meanwhile, French president Emmanuel Macron will miss out as he is beset with problems as he attempts to deal with the 'yellow vests' protest movement.

Russian and Indian leaders are also shunning Davos, and will not attend. Chinese president, Xi Jinping, the first Chinese leader to attend WEF in 2017, will also be absent and is sending his deputy instead.

What’s on the bill?

This year's theme is “Globalisation 4.0: Shaping the Global Architecture in the Age of the Fourth Industrial Revolution”.

Organisers say humanity is entering a time of profound global instability and “excessive inequality” and that leaders must learn from past mistakes to build inclusive societies and protect vulnerable communities.

“This fourth wave of globalisation needs to be human-centred, inclusive and sustainable,” said Klaus Schwab, Founder and Executive Chairman of the World Economic Forum.

“We are entering a period of profound global instability brought on by the technological disruption of the Fourth Industrial Revolution and the realignment of geo-economics and geopolitical forces.

“We need principals from all stakeholder groups in Davos to summon the imagination and commitment necessary to tackle it.”

In total, there are some 350 meetings on the official program as well as a huge number of 'off-Broadway' events.

What are the critics saying?

As the first international gathering of 2019, the forum ought to be dominated by the climate emergency, Greenpeace International executive director Jennifer Morgan has said.

“Instead, the agenda only addresses climate change as one issue of many. The Davos 'elite' are still pretending we have time to fix the climate crisis. We don't,” she said.

Climate change threads through much of the Davos program this year. With the bosses of some 1,700 companies attending, discussions will focus on how the business world is trying to adapt even if Trump has abandoned US leadership on the threat.

The youth wing of Switzerland's Socialist Party will also be taking up the environmental baton with a protest set to take place in Davos on Thursday January 24th.

“We need a critical platform against the meeting of this richest and most powerful,” said the Young Socialists Vice President, Lewin Lempert, in a statement about the protest.

“A climate catastrophe is rushing towards us, but the world's most powerful refuse to take action. The need for political action is urgent,” he added.

In any case, the WEF certainly won't be helping the environment in the short-term. There are set to be an additional 800–1,000 take-offs and landings at Zurich airport during the event, according to Swiss daily NZZ. A not-insignificant number of WEF guests will then travel onward to Davos by helicopter.

Davos has gained a reputation for extravagant parties held by Russian oligarchs, business millionaires and company CEOs where rare, ludicrously expensive wines are guzzled like water, Michelin-star chefs rustle up the canapés and music icons such as John Legend entertain the guests.

According to Business Insider in 2015 one party was shut down by police at 2am after noise complaints – but the host didn’t mind because his guests had already got through two nights’ worth of booze.

So who keeps the peace?

A police sniper in Davos during WEF 2017. Photo: Fabrice Coffrini/AFP
The Swiss federal government has made provision for the deployment of up to 5,000 armed forces personnel to keep the high profile attendees safe and secure in the coming years.
That's quite something for a municipality with a permanent population of just 12,500. The bill for security is set to come in at around 9 million francs this year – split between local and federal authorities and the WEF. The WEF pays a quarter of the total security cost.
The Swiss government justifies these high costs by saying the WEF is “an exceptional event for Switzerland as it provides a unique opportunity to cultivate relations with a great many leading figures in a special setting.”
“For about a week Davos, Graubünden and Switzerland are the focal point of national and international media attention,” the government notes.
Can you still visit Davos as a tourist during the WEF?
During the WEF, there is very visible police presence in Davos and police checks are carried out as necessary. Vehicle and baggage checks are also carried out on access roads.
However, Davos remains open for winter tourism – it's a huge ski resort – and there are no general travel restrictions in place.
How much is a ticket?
For corporate executives, how much you pay to attend Davos depends on your level of membership to WEF. According to the WEF website, annual membership (required if you want to buy a ticket to Davos) is upwards of 60,000 francs (€53,000), depending on the institution or company's “level of engagement”.
At the top of the tree are the 100 ‘strategic partner’ companies – including Accenture, Barclays, Deloitte, KPMG and Unilever – who pay a whopping 600,000 francs (€529,000) for annual membership, which entitles them to buy an access-all-sessions pass for themselves and five colleagues, including special privileges. But they still have to purchase actual tickets to the event – at 18,000 francs a pop. Ouch.
The 2018 annual meeting in Davos represented 14 percent of all WEF revenue for last year.
“The cancellation of the Annual Meeting could have negative consequences on the Foundation’s revenues,” said the organization in its most recent annual report.