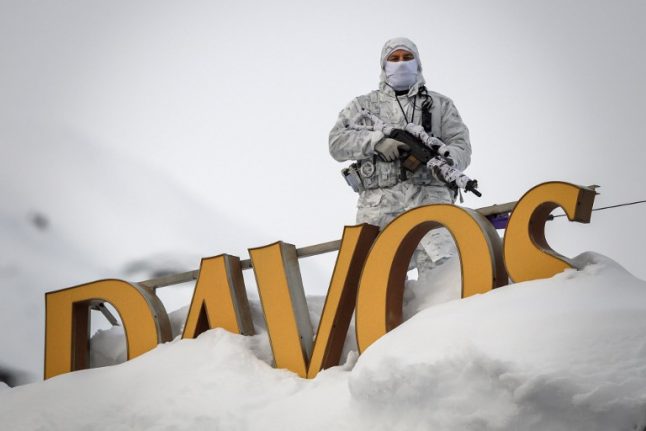 One of the thousands of armed forces personnel on duty in and around Davos during the WEF meeting. Photo: AFP

Five: That’s the number of troops who tested positive for cocaine and cannabis use during the 2016 WEF meeting in Davos. A further seven soldiers tested positive for cannabis use alone. But a senior officer tried hard to put a good spin on the situation. “Our soldiers gave an exemplary performance…The few regrettable cases of drug consumption should not tarnish the overall positive impression,” Jean-Marc Halter, divisional commander of the Davos deployment, said at the time.

955.90: The cheapest hotel room in Davos on Wednesday night will set you back 955.90 Swiss francs (€840), according to booking.com. That price is for for an economy single at the Zentrum Haus Hotel. Only three hotels have room available for January 23rd, with the most expensive option being a (somewhat poky, 12 square metre) room costing 10,012 francs at the Hotel Derby. At least breakfast is included in the price.

This hotel room in Davos would set you back 10.012 francs on Wednesday night.

2002: This is the only year since its inception that the WEF meeting did not take place in Davos. Instead, it was held in New York as a sign of solidarity after the terrorist attacks of September 11th 2001.

-4C: This is the maximum temperature expected in Davos on Tuesday, the first official day of the WEF annual meeting. The minimum, meanwhile, will be a bone-chilling -14C.  Things are not expected to warm up during the week either.

Read also: Davos 2019 – what you need to know about 'the world's most exclusive business bash'

Nothing: This is how much you will pay to attend one of the Open Forum events organised by the WEF during its Davos meeting. The events are open to the public but seating is limited so the WEF recommends you come early because people start lining up for tickets around 90 minutes beforehand.

One of the highlights this year is a conversation with the biologist Jane Goodall about her life’s journey through the world’s last forests and her work with great apes. This takes place on Wednesday at 1pm.

94 million: A study by researchers at the University of St Gallen estimated that the WEF annual meeting in 2017 generated revenue of 94 million francs across Switzerland. Meanwhile, local, cantonal and federal authorities received tax revenues of between 9.3 million francs and 10.5 million francs as a result of the event.

22: That’s the percentage of Davos attendees in 2019 who are women. This is one percentage point higher than in 2018.

Authorities won't reveal just how many police and soldiers are on duty during the WEF meeting. Photo: AFP

55: This is how many kilometres of fencing has been erected for security reasons during the WEF meeting.

7,000: As the hotel prices above reveal, staying in Davos during the WEF is not for the budget conscious. One Airbnb host was charging 7,000 francs (€6,170) per night for a rustic-looking but luxuriously-fitted five-room house in the city during the event, Swiss news site 20 Minuten reported recently. In fact, accommodation prices in the town are so high that the WEF itself has actually put up many of its own employees in nearby (and cheaper) Klosters.

1,560: This is how many metres above sea level Davos lies, making it the highest city in Europe.

41: Hungry? A 'Tokyo' menu made up of eight California rolls will cost you 41 francs (€36) at the Pöstli Lounge at the Morosani Posthotel in Davos. Olives cost 6 francs and jumbo fries with cocktail sauce 8 francs. While this may seem expensive, it is actually not bad value for Switzerland.

130: This is the estimated number of additional take-offs and landings from Zurich airport during the WEF meeting.

92: The oldest participant on the official WEF program is the natural historian and broadcaster David Attenborough. Attenborough was awarded one of the WEF’s Crystal Awards on Monday for his environmental stewardship. You can see footage of his speech – including his famously distinctive diction – here.

12: The longest ski run in the Davos Klosters ski area is the classic Weissfluh-Gipfel–Küblis run at 12 kilometres. Four of the six winter sport resorts in the area are open during the WEF, with only the Pischa and the Rinerhorn closed. One local resident told The Local that the WEF period is a great time to take to the slopes in Davos because many people assume they can't go skiing in the area at this time.