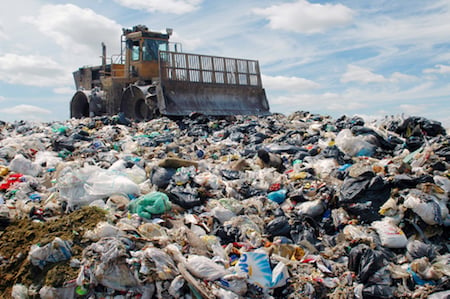 Every year, the country produces up to 90 million tonnes of waste annually – making it one of the biggest waste producers in Europe.

This is according to a new survey from by the European Statistical Office Eurostat, which reveals that just Norway and Denmark produce more waste annually than Switzerland.

For comparison, 20 years ago, each Swiss produced 100 kilograms of waste every year. Today that number is 706 kilograms (kg).

Surprisingly, this relatively high number represents a decrease on last year when each Swiss citizen produced 720 kg of waste.

The construction industry is the single biggest producer of waste, while every day waste produced by citizens comes in second.

Citizens in neighbouring countries Germany produce 603 kg. Austrians produce 570 kg each year, while the French and Italians produce 513 kg and 489 kg of waste each year respectively.

Not all bad news

But, despite Switzerland being among Europe’s biggest waste producers, the country does more recycling than most.

Every year, each Swiss citizen recycles 217 kg of waste – more than 250 percent of the EU average of 81 kg.

In recent years, Switzerland has taken steps to increase recycling statistics and, since 2000, its recycling rate has increased from 45 to 53 per cent.

This means that more than half of all waste is recycled or composted.

However, each year every citizen still produces approximately 332 kilograms of waste that must be burned.