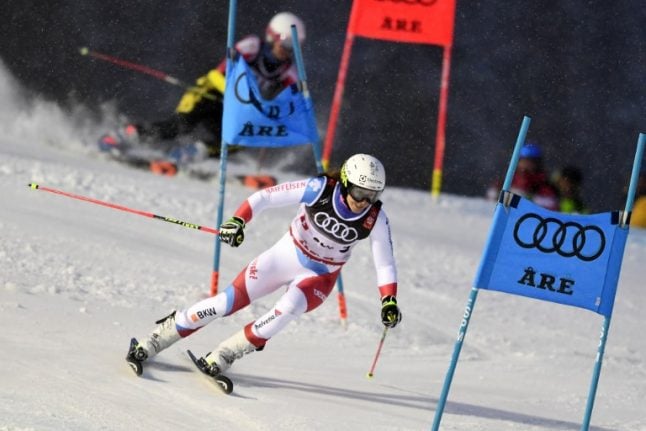 Holdener, who won Friday's alpine combined, and towering teammate Ramon Zenhaeusern were each unbeaten in four races on the floodlit Olympia parallel slalom course in front of a large crowd.

Daniel Yule and Aline Danioth completed the Swiss team, also the reigning Olympic champions having won the event at its Games debut in Pyeongchang last year.

Zenhaeusern, who has made three World Cup podiums winning once, clocked an electric 23.29sec to see his team beat hosts Sweden on time difference after the quarter-final tie ended 2-2.

He was also instrumental in pulling the Swiss past Germany in the semi-final, his 23.37sec-winning time over Linus Strasser enough to bag a final spot against Austria.

Come the final, Holdener beat off Katharina Liensberger before Katharina Truppe and Michael Matt both won to hand Austria a 2-1 lead.

Zenhaeusern, who stands 2m tall, kept his nerve, however, timing an event-fastest 23.23sec to handsomely beat slalom bronze medallist Marco Schwarz down and hand the Swiss gold thanks to a 0.77sec tie-breaking lead.

“Big hats off to Wendy and Ramon, who pulled the rest of us through and laid down the fast times,” said Yule.

“The team spirit is always so nice, we had fun.”

Holdener added: “We had a great team, a great team spirit, we were fighting for it and it's so awesome to race with these nice ski racers!

“Even if we kicked out Sweden, we were really happy with the support, it was an awesome crowd today.”

Italy claimed bronze after beating Germany 3-1. 2017 world champions France were knocked out by the Germans in the quarter-finals.