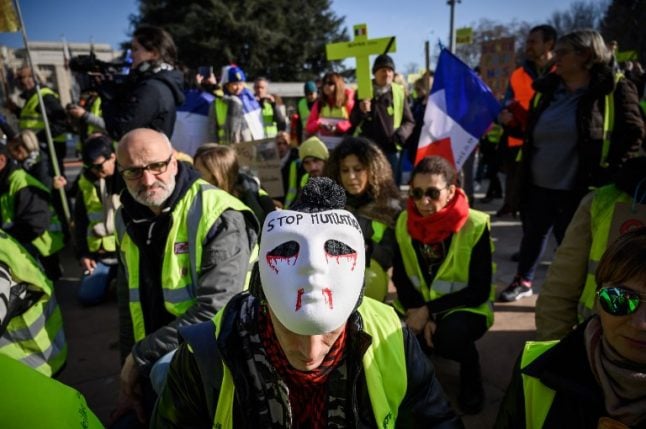 “It’s hard during the week. People are working,” one ‘yellow vest’ protester said to Swiss news agency SDA of the smaller-than-expected number of attendees at the demonstration, which was held in perfect spring-like conditions.

Organisers had previously spoken of up to 5,000 participants from around France and Switzerland making it to the protest, but Swiss media reported that only around 1,000 people had actually shown up, while Geneva police put the number at 600.

The protest at Geneva’s Place des Nations was organised by Frenchman Nico Mollier.

Mollier said on Facebook the aim of the action was to draw attention to police violence against ‘yellow vest’ supporters during three months of protest actions that have divided France.

The Geneva location for Wednesday’s protest was chosen because of the upcoming session of the UN Human Rights Council in the city, according to one protester on Wednesday.

Among the participants was Swiss left-wing icon Jean Ziegler who denounced the use of Swiss-made LBD40/GL06 anti-riot guns by French police during recent protests in France.

The 'less-lethal' weapons have been blamed for a number of serious injuries during protests in France.

Brügger & Thomet has denied accusations that its LBD40 is dangerous or unfit for use. In a statement, the firm laid the blame on the French-produced munitions being used with the LBD40 in France.

“It must be asserted that the LBD40 (GL06), together with the SIR munitions manufactured by B&T, is a precise and effective product that comes with little risk of injury,” said the company.

The yellow vest' movement began some three months ago in France as a protest against new fuel taxes. But it has since developed into a far broader movement in opposition to the policies and style of French President Emmanuel Macron.

An estimated 41,500 people participated in protests around the country last weekend – a long way below the 282,000 peak seen in the movement's early days.