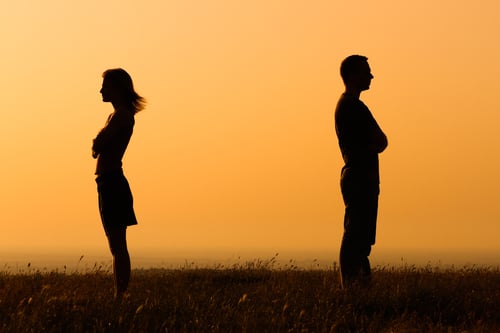 In 2018 there were 16,200 divorces recorded in Switzerland, the country’s official stats office (OFS) announced on Monday.

That represents an increase of 2.1 percent compared to 2017 figures, but the most alarming rate is among foreign couples in Switzerland, for whom the number of divorces rose by a staggering 23.4 percent.

In fact, it’s this marriage breakdown among expats in Switzerland that’s partly responsible for the overall rise in divorces, as among all-Swiss couples the divorce rate dropped by 6.1 percent and among Swiss-foreign couples it also fell slightly by 0.9 percent.

Overall, Switzerland’s divorce rate currently stands at around 40 percent, with the average marriage that ends in breakup lasting 15 years.

At the current rate, the OFS estimates that two in every five marriages will end in divorce at some point.

According to official data, there was also a sharp decrease in the number of registered civil partnerships between same-sex couples, down by 13.2 percent compared to 2017.

It’s worth noting that out of all newborns in Switzerland in 2018, a quarter were born to parents who were unmarried.

Overall Switzerland’s population grew by 18,600 in 2018, despite the country’s lower birth rate.

SEE ALSO:  A portrait of modern Switzerland in ten stats