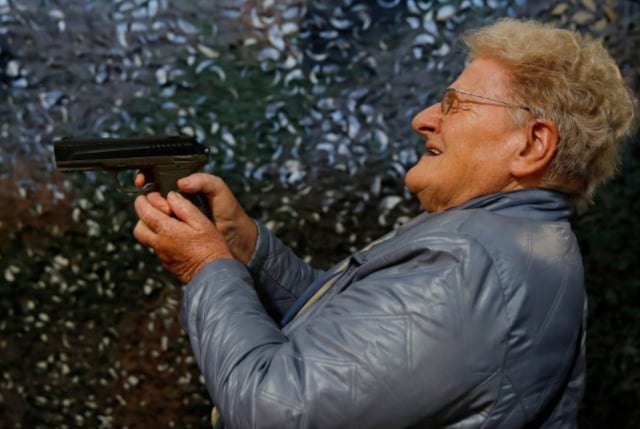 Swiss police there is a rise in the number of older people wanting to equip themselves with weapons. Photo: AFP

But in a state where compulsory military service means many are comfortable around weapons, voters might, in a May referendum, push back against gun reforms demanded by the European Union.

And there is evidence that the Swiss broadly support a citizen's right to own weapons – and are acquiring guns at an accelerated pace.

In the eastern city of Lucerne last week, at one of the country's largest arms trade fairs, vendors boasted of surging sales including a fresh appetite for weapons among the elderly.

Visitors at the Arms Trade Fair, in Lucerne on March 29th. Photo: AFP

This apparent pro-gun outlook may partly be driven by the lack of horrific mass shootings such as last month's massacre in Christchurch, New Zealand. Lawmakers there are well on the way to restricting access to military-style semi-automatic weapons.

But Switzerland – which has the world's 16th highest rate of gun ownership according to a 2018 report by the Geneva-based Small Arms Survey – is now being forced to confront tensions between its traditions and a demand from the EU to toughen its gun laws.

While the country is not a member of the EU, it belongs to the visa-free Schengen travel region and must therefore comply with various rules applied by the bloc.

Read also: Most Swiss back draft deal on future relations with EU

Brussels called on the Swiss government to amend its gun laws to make them compatible with EU restrictions tightened following the 2015 Paris attacks.

Swiss lawmakers approved reforms that the EU has deemed sufficient.

But that prompted a fierce pushback by members of the right-wing Swiss People's Party (SVP), which has gathered enough signatures to force a referendum on the measures next month.

At the Lucerne fair 56-year-old Barbara Kottler, browsing the rows of weapons on offer, dismissed the notion that legal gun sales posed a public security threat.

“People who shoot for sport are very peaceful,” she told the AFP news agency. “Those who cause problems are people who acquire the weapons illegally.”

Legally buying a weapon in Switzerland is not particularly complicated.

All citizens without a criminal record can own a firearm, a right that also applies to most foreign nationals living in the country.

Policeman Josef Rust, who heads the weapons registration office in Lucerne, told AFP that heightened demand for gun permits was “massive all across Switzerland”.

“We have requests from very old people who want to protect themselves. They connect it with immigration, with the terrorist danger or growing crime,” Rust said.

“It is certainly not a positive evolution that very old people equip themselves with weapons, but we cannot prevent it: if someone wishes to do so and meets the criteria, we must grant the license.”

Jean-Paul Schild, owner of Schild Waffen gun shop, said he had seen rising purchases among women, who are not content to just own a weapon but also want to “master it”.

Five years ago, Schild Waffen offered shooting classes twice a month. Now, he said, they have them every week, with increased demand partly driven by more female clients.

One reason why the EU-mandated reforms have touched a nerve is because Swiss gun culture is tied to strong traditions of national defence service.

Most Swiss men undergo obligatory military service, consisting of three weeks of service each year between the ages of 18 and 30. They are allowed to keep their assigned weapon when they are done.

Markus Thommen, a weapons collector from Zurich, told AFP that his “first contact” with a weapon was at home with his father, who showed him how to clean it.

“We knew that guns were not used to attack, but to defend the country, or maybe the family,” the 61-year-old said.

The EU laws, aimed at fighting terrorism, restrict certain types of guns, such as semi-automatic weapons and firearms with high-capacity magazines.

The Swiss government has said that after securing compromises from Brussels it adopted a reform package that both addresses EU concerns and safeguards national traditions.

But, in keeping with the party tradition, the SVP has mounted an emotive campaign to defeat the reforms next month.

The government has countered that if voters reject the measures, Switzerland risks being booted out of the Schengen region, a potentially disastrous outcome for travel and tourism.