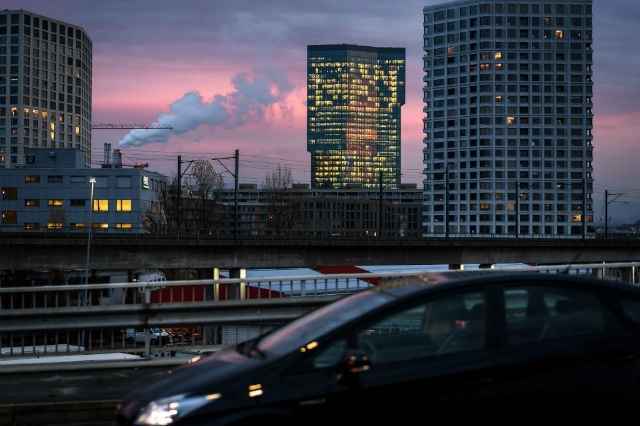 Zurich's Prime Tower is a symbol of the recent real estate boom, but the risk is more in residential mortgages. Photo: Fabrice Coffrini/APF
But that warning this week about the country's mortgage market by Mark Branson, the chief executive of the Swiss market supervisor (FINMA), hardly came out of the blue.
In recent months, several red flags have emerged about the health of the Swiss real estate sector, as prices for buy-to-let properties have continued to rise amid stagnating rents and increasing vacancies.
In his annual speech to the media, Branson outlined his concerns and called for action.
“The mortgage market is critical to the stability of the Swiss financial centre. It is too big to fail,” he said.
He also stressed that mortgage crises have a proven history of rippling across the economies they infect.
FINMA's common practice of intervening to rein in individual institutions that take on too much risk “is not enough to counteract the generalised overheating trends we are currently seeing,” Branson said. “As a result, action is needed now.”
'Ghost town'?
FINMA's call came days after the International Monetary Fund issued its own warning about the Swiss financial sector's exposure to real estate lending. “Around 85 percent of banks' domestic assets are concentrated in mortgages,” the IMF said in a statement following an official visit to the wealthy Alpine nation.
It noted that aside from banks, Swiss pension funds and insurance companies also had “significant exposure to real estate”. “Shocks to property prices could resonate through the economy,” the IMF said.
Rental properties in Switzerland have long been attractive investments, with purchase prices for such assets at record highs. Persistently low interest rates have helped fuel the buying spree.
But FINMA said it was worried about market imbalances because surging prices and continuing construction of new units were happening despite government figures showing that a record 70,000 residential units were vacant in mid-2018.
“To put this in perspective, imagine a ghost town of about the same size as Bern… with every single home empty,” Branson said, referring to the Swiss capital with a population of roughly 140,000.
As the FINMA boss noted, high purchase prices for units combined with high vacancies raises the risk of loan defaults, especially if interest rates rise. Mark Branson has headed FINMA since 2014. Photo: FINMA
Government or self-regulation?
In response to mounting concerns, the Swiss Bankers Association lobby group said last month that it was open to amending its self-regulation of mortgage lending. The SBA said it would do its own analysis and, if it shared regulators' concerns, would act to stabilise the market.
It specifically raised the prospect or shortening the amortisation period of mortgages and cutting the loan-to-value ratio, forcing buyers to come up with larger down payments.
Unsurprisingly for a private sector lobby group, the SBA stressed that “self-regulation is preferable to a state regulation.”
The IMF sounded less than convinced by that argument, noting that the Swiss banks had shown “a belated willingness” to act on mortgage lending, while voicing “reservations concerning the concept of self-regulation by banks”.
FINMA's Branson struck an open-minded note on what solutions might work, stressing that his priority was avoiding a crisis.
He noted that tighter self-regulation imposed from 2012 to 2014 helped slow lending to owner-occupied properties, suggesting such measures could prove effective again.
“Whether through regulation or self-regulation…, it is in everyone's interest to strengthen stability and sustainability in the real estate and mortgage markets,” he said.