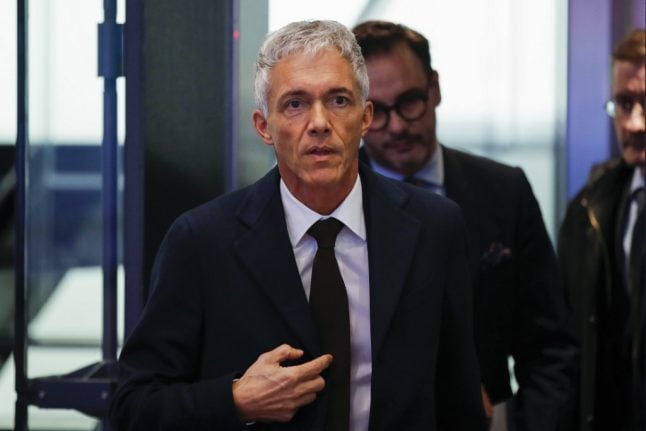 Michael Lauber during the press conference on Friday. Photo: AFP

Switzerland's top prosecutor Michael Lauber, who is in charge of the FIFA probe, has come under fire over a series of reportedly undisclosed contacts with FIFA president Gianni Infantino, also a Swiss national.

The body that oversees Lauber's office, known as the AS-MPC, said last month that those two 2016 contacts, held shortly after Infantino took charge of FIFA from the disgraced Sepp Blatter, were “not problematic.”

But Swiss media have reported a third meeting, which the AS-MPC said last month merited a “preliminary inquiry.”

In a statement on Friday, the AS-MPC announced an escalation of the probe, saying it had decided to start a “disciplinary investigation concerning the attorney general of the confederation, Michael Lauber.”

The aim is to shed light on “possible violations of (Lauber's) professional duties … in the context of the complex FIFA process.”

After the disciplinary probe was announced, Lauber held a press conference to state that he had no intention of standing down and hoped to be reappointed for a new term, which would run from 2020 to 2023.

Parliament is due to decide on his renomination next month.

There was “no reason to withdraw my candidacy,” Lauber said, lamenting the “institution crisis” triggered by the new probe.

The investigation “creates the impression that I did not tell the truth,” he said.

According to the oversight body, Lauber had denied the existence of any additional FIFA contacts beyond the two meetings that were initially reported.

Lauber had conceded that he “probably” made “mistakes” amid the FIFA affair, but did not elaborate on any specific transgressions and criticised more than a month of media coverage of the now notorious third FIFA meeting.

Lauber and his office have publicly defended the contacts with Infantino, arguing they were logically necessary to the sprawling inquiry into world fooball's governing body.

Switzerland has pursued a number of cases since a raid on a luxury hotel in Zurich in May 2015 led to the arrests of a several FIFA executives and exposed the corrupt underbelly of world football.

In addition to Blatter, the high-profile targets of Swiss investigators include FIFA's former secretary general Jerome Valcke and Nasser Al-Khelaifi, the powerful Qatari national and media executive who is the president of French giants Paris Saint-Germain.

The meetings between Lauber and Infantino were set up by Rinaldo Arnold, a prosector in the southern Swiss canton of Valais and a childhood friend of the FIFA president.

A Swiss magistrate who investigated those gifts has cleared Arnold of wrongdoing after ruling that the gifts were not aimed at influencing his work.