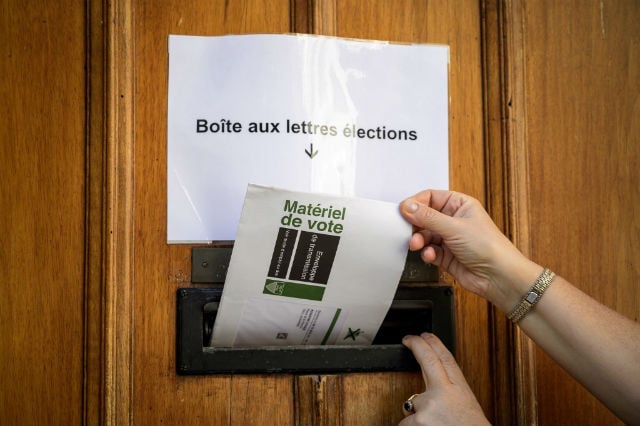 A woman inserts her postal vote into the door of a ballot box on September 29 in Lausanne. Photo: Fabrice Coffrini/AFP
Opinion polls point to a “green wave” during the vote, the Sotomo political research institute said, possibly ushering in one of the most significant shifts in recent Swiss political history.
The Swiss People's Party (SVP), which has repeatedly been accused of demonising migrants, is likely to remain the largest parliamentary party, with opinion polls giving it over 27 percent support in the wealthy Alpine nation.
But that is down from the 29 percent the SVP garnered in 2015, and multiple surveys have shown that climate change has displaced migration as the top priority among the Swiss electorate.
The Green Party, which won just over seven percent in 2015, is now backed by nearly 11 percent of voters, according to a poll released this month by public broadcaster RTS.
Meanwhile, the Green Liberals — an environmentalist party with libertarian socio-economic policies — has also seen its fortunes rise, with the RTS poll giving it over seven percent support, compared to less than five percent four years ago.
Green cabinet seat?
If the environmentalist parties match or outperform their poll numbers they could, through an alliance, force their way into the executive branch for the first time.
Under Switzerland's unique political system, the election will decide the 200 lower house lawmakers and 46 senators elected to four-year terms, but the make-up of the executive Federal Council will not be decided until December 11.
The country's so-called “magic formula” sees the council's seven cabinet positions divided among the four leading parties.
Currently, six cabinet seats are shared equally between the SVP, the Socialist Party and the right-leaning Free Democratic Party, with the centrist Christian Democrats holding the seventh seat.
The presidency rotates each year.
Analysts have questioned whether a environmental alliance could crack the cabinet, in part because there is no guarantee that the leftwing Greens and the libertarian Green Liberals could agree on a unity candidate.
But Green Party vice president Lisa Mazzone told AFP that, given the severity of the climate emergency, her bloc intends to be “a force” in the executive.
'Dormant electorate'
Turnout in Swiss national elections has not passed 50 percent since 1975, prompting jokes among some political observers that abstainers have been the country's largest bloc for more than four decades.
Mazzone said the Green strategy has relied on mobilising “a dormant electorate” by targeting young people who have stayed away from politics but are increasingly worried about climate change.
The Greens have “identified a lot of potential among abstainers,” she told AFP.