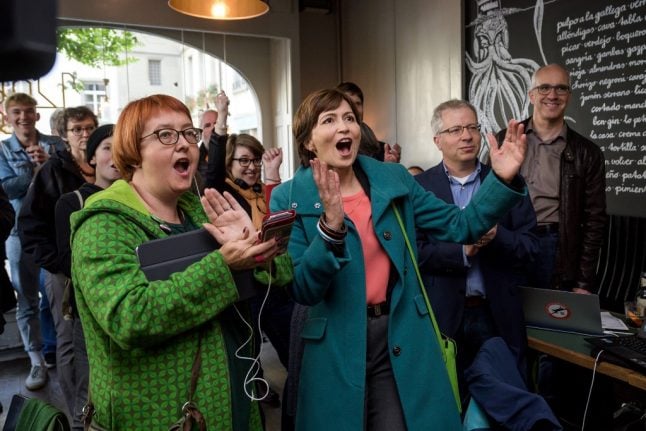 Swiss Green Party President Regula Rytz (C) reacts with party members upon the announcement of the first results during the general election on October 20, 2019. AFP

When the Federal Assembly re-convenes at the beginning of December, women will occupy 84 out of 200 seats in the National Council, 20 more than after the last election in 2015.

In other words women MPs now occupy 42 percent of seats in the parliament — the highest number ever.

Results for the 46-person Council of States are not yet finalized, as some seats will have to go through a second round of voting — not an unusual occurrence in Swiss elections.

The increase in the number of women is across nearly all party lines, with the largest percentage representing left-wing Christian Democrats and the Green Party, and the fewest coming from the conservative Swiss People’s Party.

Only one party, the centre-right Christian Democrats, has two less women representatives now than in 2015.

According to the Swiss news channel RTS, this leap “was probably driven by the women’s strike”, which took place across Switzerland on June 14th.

On that day, an estimated half a million women from all walks of life took to the streets in several Swiss cities, demanding “higher pay, greater equality and more respect”.

Compared to some other nations, Swiss parliament  doesn't fare badly in terms of female representation. France's parliament is composed of 50 percent women; in Germany that number is 30.9 percent, and in the UK 32 percent. Women make up 23.7 percent of U.S. Congress and 25 percent serve in the Senate.