EXPLAINED: Which parts of Switzerland are vulnerable to earthquakes?

Switzerland is hit by by hundreds of earthquakes each year and often the tremors are felt by people and some can cause damage. Here's what you need to know about quakes in Switzerland.

An earthquake shook the region of Zinal just after midnight on August 24th. The epicentre was measured at 7.3 km underground.

The magnitude of the quake was measured at 3.2 on the open Richter scale, according to the Swiss Seismological Service (SED) at the Swiss Federal Institute of Technology in Zurich, which is responsible for monitoring earthquakes in Switzerland and its neighbouring countries, and for assessing Switzerland’s seismic hazard.

Zinal's quake was probably also felt in the Rhône valley, especially around Sierre and in Haut-Valais, according to the SED's map. There was no damage, given the low magnitude.

Was this an unusual event?

No, Switzerland experiences earthquakes very regularly, particularly in the Valais and the Alps.

“Switzerland has to expect a severe earthquake with a magnitude of about 6 every 50 to 150 years. The last earthquake of that strength occurred in 1946 near Sierre in Valais. However, such a quake can occur anywhere and at any time in Switzerland”, SED's Michèle Marti told The Local.

Looking back at the past decade, SED has recorded an average of around 270 earthquakes per year in the Valais and its immediate surroundings; however, only "two or three a year were felt by local residents".

In one case, on November 6th 2019, light earthquakes were felt throughout Bern and Valais, following up on seismic activity felt by local residents in prior days.

The two major quakes took place at 1:54am and 4:36am  both recorded at 3.4 on the Richter scale. Each was followed by a number of aftershocks.

Scores of local residents reported feeling the earthquakes, calling in to the Euro-Mediterranean Seismological Center (EMSC). There have been no reports of damage or injury as a result of those quakes.

Another quake took place near Schaffhausen and was recorded at 3.9 on the Richter scale.

Seismologist Philipp Kästli told the Keystone News Agency at the time that further quakes - whether large or small - could not be ruled out.

Seismic activity is common in Switzerland, although most of it goes unnoticed by the population. While earthquakes can be common, those hitting seven and above on the Richter scale - more commonly seen in high risk countries such as Italy, Turkey, Bosnia and Herzegovina and Croatia - are comparatively rare.

Switzerland is hit by a major earthquake on average of once per every 100 years, with the last taking place in 1946 just north of Sierre. It claimed three lives and caused millions of francs' worth of damage.

"More earthquakes occur in the Valais than anywhere else in Switzerland. The region therefore has the country's highest seismic hazard," according to SED.

"Over the past 10 years, the SED has recorded an average of around 270 earthquakes per year in the Valais and its immediate surroundings, of which only two or three a year were felt by local residents," it added.

According to the statisticians at SED an earthquake with a magnitude of around 6 occurs in the Valais approximately every 100 years on average. This equates to a probability of occurrence of roughly 1 percent per year for such a quake.

This SED map below shows which parts of Switzerland are most susceptible to earthquakes: 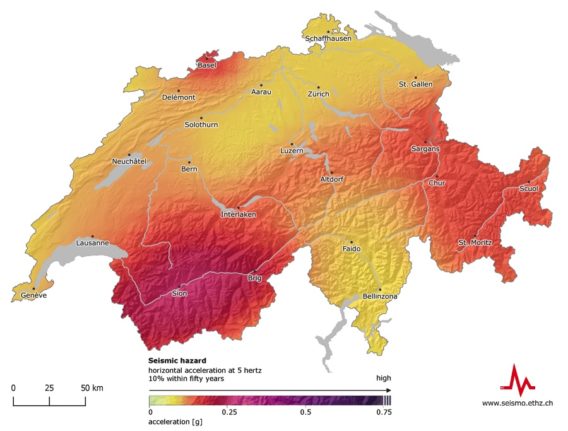 Why is Valais most earthquake-prone?

It has to do with its mountainous topography.

"Seismic activity in Switzerland and the formation of the Alps are closely linked", according to SED.

The Alps are made of various rocks and, as SED explains it, "Essentially, earthquakes are caused by the sudden release of stresses in the earth's crust. These stresses are brought about by large-scale continental movements. If they are stronger than the rock, a sudden rupture occurs along existing areas of weakness in the subsurface, triggering the seismic waves felt on the earth's surface".

The abundance of mountains in Graubünden also makes this canton susceptible to quakes.

However, "every region of Switzerland is exposed to some degree of seismic hazard", SED points out.

An interesting fact: not all earthquakes are 'natural' disasters; some can be man-made.

For instance, in 2006, drilling work for construction of a geothermal power plant in Basel caused a small earthquake — 2.7 on a Richter scale — which caused minor damage to surrounding buildings.

The strongest earthquakes are indicated in this SED chart: 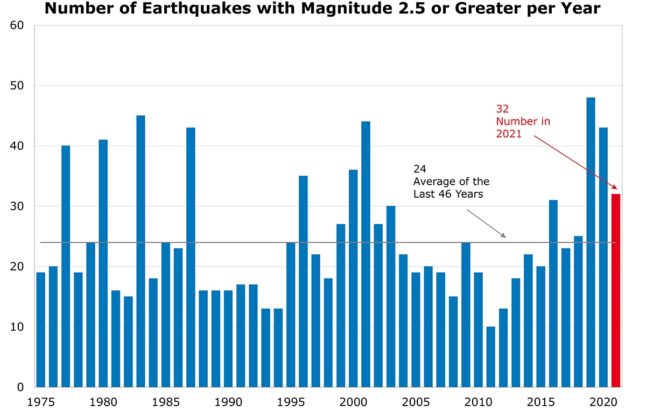 Can earthquakes be predicted or prevented?

Man-made tremours, like the one on Basel, can likely be prevented, if not always predicted.

The natural ones, however, can be neither prevented nor reliably predicted, SED said.

However, "thanks to extensive research, much is now known about how often and how intensely the earth could shake at a given location in the future".

Also, SED is currently testing an  early warning system. "Such warnings can be issued because the measurements are transmitted at the speed of light. However, since earthquake early warnings can only be given at a certain distance from the epicentre and are only useful for more powerful earthquakes, their practical use for Switzerland remains to be determined".

One 'worst-case' scenario that had been imagined after the 2019 quake was a 6.5-magnitude earthquake striking between the cities of Sion and Sierre, leaving 800 dead, 1,600 buildings destroyed, and 119,000 people homeless.

You can find more about this here: