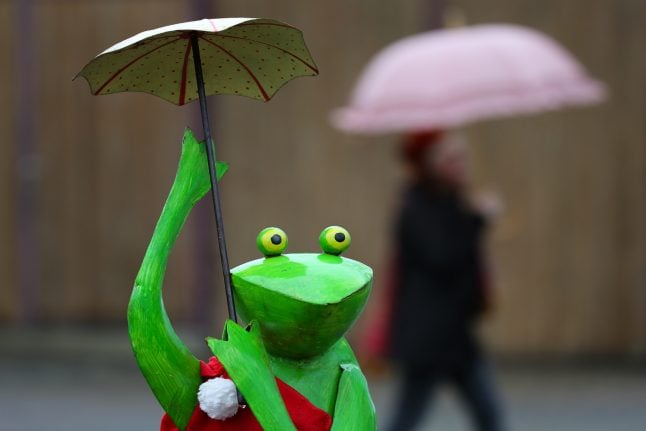 What does it mean?

The word “Wetterfrosch” (weather frog or weatherman) has two meanings which both stem from one myth.

The first and literal definition translates to weather frog, and directly originates from the idea that European tree frogs can predict the weather because they climb up plants as the sun starts to emerge.

This occurs not because frogs can predict the weather, but because these ambitious amphibians are in search of insects for food, who tend to fly higher in the air when the weather is warmer.

Nevertheless, this leads to some people holding tree frogs inside jars with a built-in latter, hoping for their position on the ladder to forecast the weather.

The further the frog climbs ladder, the better the weather will be. On the contrary, the closer he stays to the ground, the worse the weather is likely to be.

The second meaning refers to a meteorologist (weatherman) or a person who is interested in the weather, and therefore is similar to the weather frog.

How is it used?

In both definitions, the word is used in a humorous sense because an actual weather frog does not exist, nor can a tree frog foresee the weather.

One could comically refer to the meteorologists on TV as “Wetterfrösche”.

“I do not think that the weather frog can really foretell the weather.”

The weathermen on the radio said that it will be sunny tomorrow.