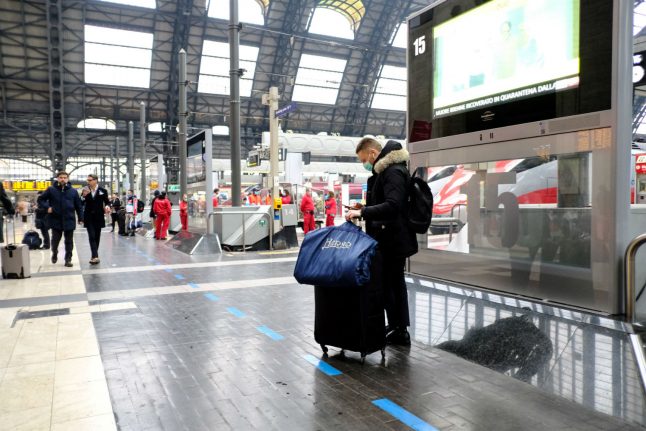 The Italian-speaking canton, which borders the Italian region of Lombardy which is considered the ‘epicentre’ of the country’s coronavirus outbreak, has stepped up its measures to halt the spread of the virus.

Seven people in Italy have died as a result of the virus. Hundreds have been infected, almost all of which are in the two northern Italian regions of Lombardy and Veneto.

A spokesman for the Swiss Federal Office of Public Health told local media that they were concerned about the outbreak in neighbouring Italy, saying the spread of the virus “must now be brought under control by all means”.

READ: Coronavirus in Italy: Should Switzerland close its southern border?

The Swiss Health Minister said on Tuesday “we are monitoring the situation hour by hour and are well prepared to protect the population”.

The spokesman said the situation in Italy was being monitored and the planned steps have been in development for several weeks.

As yet, there are no confirmed cases of the virus in Ticino despite more than 300 people examined. Isolation in hospitals all across Ticino

Hospitals in Ticino are isolating all patients who have shown signs of breathing difficulties or other flu-like symptoms.

Unlike in previous weeks, this is now being done in all cases – even without patients having taken a trip to China or having had contact with someone infected with the virus in the previous fortnight.

From Tuesday onwards, patients with suspicious symptoms will be tested and will have their results available within two hours.

A hotline has been set up in all national languages to deal with the virus.

Information on the hotline can be found here.

As reported in the Swiss daily 20 Minutes, the hotline received 270 reports on Sunday, in addition to 170 on Saturday.

The Swiss Federal Office of Public Health has also launched an information to campaign to allay fears about the virus – as well as to let people know how they should deal with symptoms and prevent the spread.

Flyers and posters will be produced and placed at airports, train stations and other locations at borders. Public transport staff will be given specific instructions.

While these measures will apply in Ticino, they’re also set for implementation in Valais and Grisons, which also border Italy.

The populist Swiss People's Party has called for greater restrictions on border crossings, although these calls have been rejected.

Although Austria has stopped all trains running across its border with Italy, Switzerland has declined to put in place similar restrictions saying they are ineffective.

The SBB said that while no special measures have been taken as yet, “we are in close contact with the Swiss Federal Office of Public Health and we are following its recommendations”.

Buses and other traffic have also not been restricted. School trips to Italy in the canton of Vaud have however been postponed.