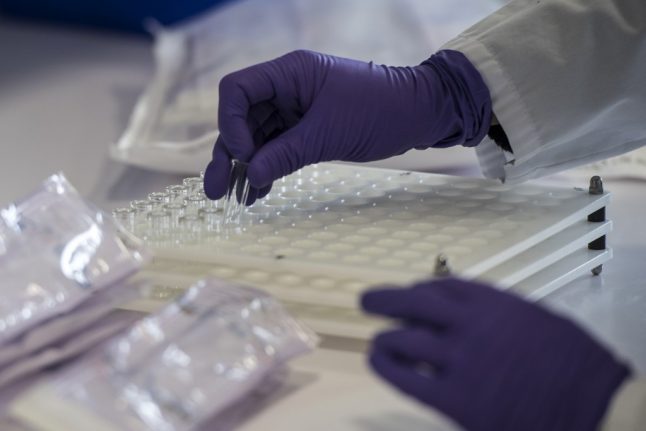 Testing is underway for more cases of coronavirus. Photo by JEAN-PHILIPPE KSIAZEK/AFP

So far, nine infections with the new coronavirus have been confirmed in Switzerland. One case each have been reported in the cantons of Ticino, Zurich, Geneva, Vaud and Aargau.

The cantons of Basel and Grisons (Graubünden) each reported two infected people.

The newly declared cases include a cross-border worker from France who is employed in Vaud, and a Basel daycare worker who became ill after a trip to Milan.

The children who were in her care at the daycare center will now be quarantined for 14 days.

According to The Federal Office of Public Health (FOPH), eight of the people who had tested positive so far have been infected in Italy in the past few weeks.

“All patients are being treated in hospital in an isolation unit. Their health condition is good”, health authorities said.

FOPH has launched an information campaign on how people can protect themselves and others against Covid-19.


In total over 500 people had been tested for coronavirus in Switzerland so far but were confirmed negative. Additionally, 130 suspected cases are being tested currently, FOPH said.

The fear over the spread of coronavirus has prompted many residents to stock up on basic necessities.

Migros, Switzerland’s largest supermarket chain, even set up a ‘crisis unit’ to ensure that enough provisions are available at all times.

Increasing numbers of panicked consumers are also buying emergency ration kits online. The kits include canned and other non-perishable food.

“Currently, we have 20 times more requests than usual. We’ve never had so many orders at once. We are literally overwhelmed”, Reto Schätti managing director of the supplier Sichersatt told Blick newspaper.

READ MORE: Chocolate, painkillers and cheese: The emergency pack everyone in Switzerland should have

Covid-19 is also taking a toll on major exhibitions and other events in Switzerland.

Geneva International Motor Show, one of the largest international exhibits of this kind, which was scheduled to begin on March 5th, was canceled on Friday morning, incurring losses estimated at hundreds of millions of francs.

Organisers of Geneva's international expo of fine watches said Thursday they had decided to cancel the April event because of the spread of the new coronavirus.

“In view of the latest developments concerning the worldwide spread of the COVID-19 coronavirus… the decision has been taken to cancel the upcoming edition of Watches and Wonders Geneva”, said the Fondation de la Haute Horlogerie.

Earlier this month, Swatch canceled its Zurich trade show over coronavirus fears and the International Exhibition of Inventions in Geneva had been postponed until September.

READ MORE: No handshakes and cancelled business trips: How Swiss companies are reacting to coronavirus