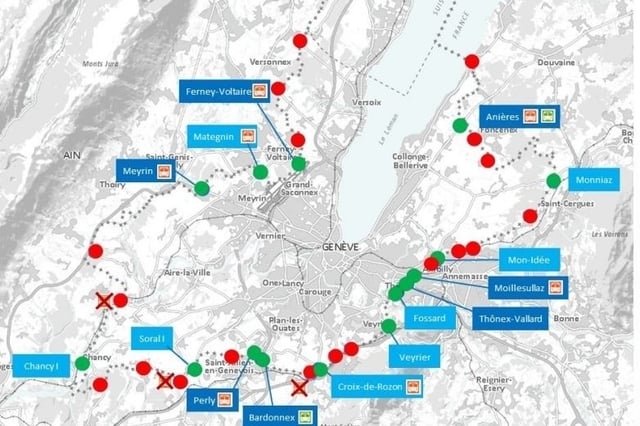 The map shows which crossings between Geneva and France are open. Photo by Police de Genéve

Why has the border been partially closed?

In order to curb the spread of coronavirus from the neighbouring countries, Federal Council decided on Monday to restore border controls from France, Italy, Germany and Austria.

Entry into Swiss territory is now only possible for Swiss citizens, people with a residence permit in Switzerland, cross-border workers with a G-permit, as well as those who have to travel in Switzerland for professional reasons. Transit and transport of commercial (but not private) goods remain authorised.

Which crossings will remain open around the clock?

Which ones will be partially open?

READ MORE: CoCoronavirus: Would Geneva be able to function if French border closed?

All other customs will remain closed at least until April 19th.

What other border crossings have been closed?

EXPLAINED: Why did Switzerland only 'partially' close its border with Italy?

Why did Switzerland not close its borders completely?

Such a move would be detrimental to the country’s economy as Switzerland relies heavily on foreign workers. This is all the more true during the coronavirus pandemic.

An estimated 85,000 French frontaliers are employed in Geneva. At Geneva’s University Hospital (HUG), for instance, 60 percent of personnel comes from France.

More than 67,800 Italians work in Ticino, with about 4,000 employed in Ticino’s healthcare sector.

So closing the borders completely would deprive Ticino's and Geneva’s hospitals of the basic personnel just at a time when both cantons (and the country in general) are grappling the Covid-19 outbreak.

Swiss Foreign Minister Ignazio Cassis said that Switzerland is “interdependent on the European continent. Our neighbours know, for example, how much the Swiss healthcare system depends on border staff”.


What about Swiss borders with Germany and Austria?

In order to implement closings in a targeted manner, “smaller border crossings around the country will be closed and cross-border traffic channelled through larger crossings,” the Federal Council said in a statement.

A list of these crossings will be published by the Federal Customs Administration as they happen.