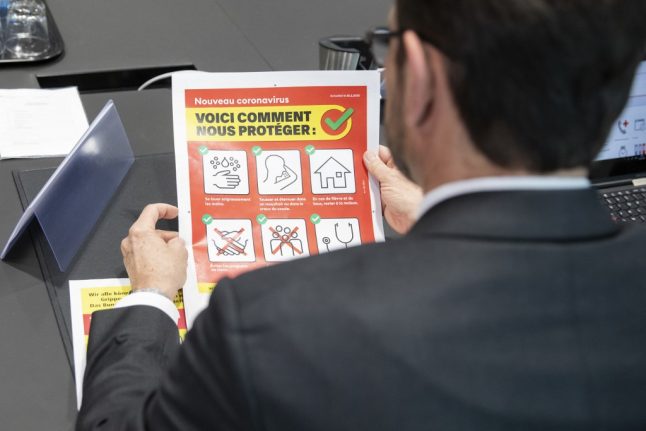 Before the situation improves, however, the progression of positive cases “will probably be exponential”, the Swiss Federal Office of Public Health (FOPH) said on Tuesday.

“This is just the beginning of the wave,” said Daniel Koch, head of FOPH’s communicable diseases division. “The numbers will continue to climb in the coming days”.

To date, Switzerland has 2,700 cases of coronavirus and 19 deaths.

The measures are not expected to show their effects until the end of next week, because people who are already infected but don’t know it yet may not have symptoms for five or six days, FOPH said.

“We cannot stop the virus, but we can influence the infection curve”, Koch noted.

The encouraging predictions are based on Chinese figures.

In China, where coronavirus originated, the first quarantine measures were introduced in Wuhan on January 20th, before the city completely closed on January 23th, with 15 others shuttered the following day.

Official surveys show that the onset of symptoms began to decrease six days after the first measures were implemented, and that it took several more days for this decline to be reflected in the official statistics. Mortality rates started to drop by mid-February.

FOPH stressed that the positive outcome can be expected only if all Swiss residents follow the strict measures outlined by the Federal Council when it declared a state of emergency on Monday in a bid to combat the coronavirus pandemic.

The state of emergency imposes widespread restrictions on daily life in Switzerland.

“All public and private events are prohibited.

“All shops, markets, restaurants, bars and entertainment and leisure facilities, such as museums, libraries, cinemas, concert halls and theatres, sports centres, swimming pools and ski areas are to close.

“Also affected are businesses at which the recommended distance cannot be maintained, such as hairdressers and cosmetics studios”, the Federal Council said.

Schools are closed until at least April 4th (and longer in some cantons), and Switzerland’s borders with Italy, France, Germany, and Austria, are partially shut down as well, with strict controls taking place at all entry points.

READ MORE: EXPLAINED: Which border crossings are open between Geneva and France?

The new rules, which also call for hygiene measures like frequent hand washing and ‘social distancing’, and include tele-working and home confinement, are designed to help limit the spread of the virus, especially to older and immune-compromised people.

“The Federal Council calls for members of the public to act responsibly and with solidarity”, FOPH said.