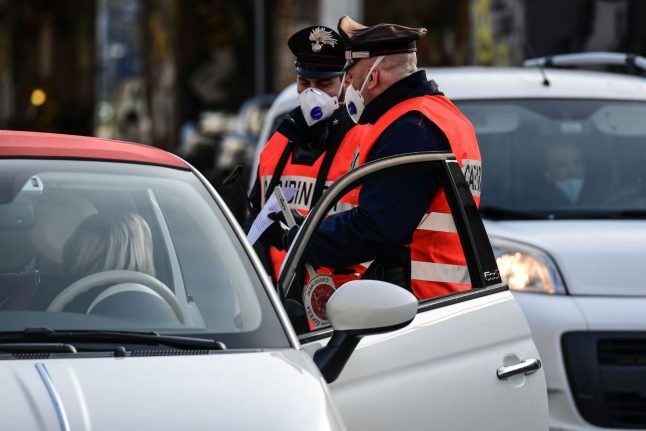 Entry into Switzerland is restricted at all its borders. Photo by MIGUEL MEDINA / AFP

These additional restrictions come as Switzerland’s confirmed Covid-19 cases now number 3,028, although the real figure is likely much higher given not every suspected case is being tested.

On March 11th, the Swiss government already closed nine entry points between Ticino and Italy to limit the traffic from the country that is at the forefront of the Covid-19 outbreak. It is the worst-hit country in Europe and outside China.

READ MORE: EXPLAINED: Why did Switzerland partially close its border with Italy

These crossings remain open as Ticino’s economy relies heavily on  67,800 Italian employees who make up more than a quarter of the total workforce in the canton.

About 4,000 of these frontaliers work in the healthcare sector, so closing the border would deprive Ticino's hospitals of the basic personnel at a time when the number of coronavirus cases is on the rise.

A similar situation exists in Geneva, which shares a border with France.

In total, 85,000 French citizens work in Geneva, making up 60 percent of the personnel at the canton’s university hospital (HUG).

As so many cross-border workers are employed in the medical sector, Geneva authorities implemented this week a ‘filtering' system allowing health care workers to have priority access.

These workers now have special stickers identifying them as medical employees. Similar priority access is also given to other essential personnel, such as police.

Switzerland also closed many of its border crossings with neighbours Germany and Austria.
In all, 130 crossings are shuttered or partially closed.

“These measures aim to protect the Swiss population and maintain the capacities of the Swiss health system,” the Federal Council said.

It added that Liechtenstein is not affected by this measure because it is part of the Swiss customs territory.

Entry is now only possible for Swiss citizens, people with a residence permit in Switzerland, cross-border workers with a G-permit, as well as those who must travel in Switzerland for professional reasons. Transit and transport of commercial (but not private) goods remain authorised.