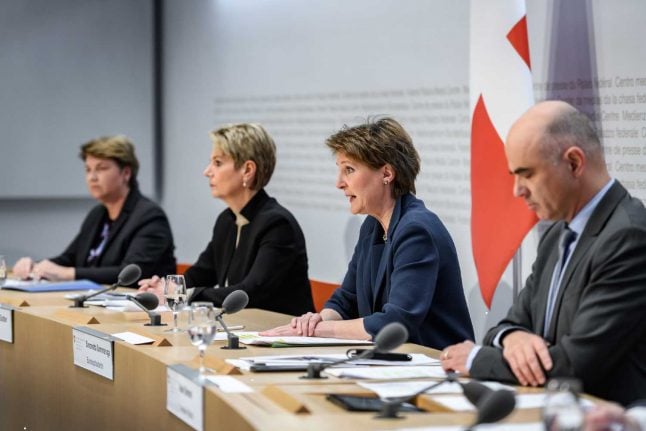 The government announced it would ban all gatherings of more than five people, and that anyone standing closer than two metres to others risked a fine.

Bans will be enforced by a CHF100 fine.

And it said that building sites that did not respect proper distancing and sanitary conditions would be shut down.

But it did not follow in the footsteps of a number of neighbouring countries, including hard-hit Italy, who have ordered their entire populations to remain at home with few exceptions.

'Help is coming': What you need to know about Switzerland's new emergency coronavirus measures

Swiss Health Minister Alain Berset told reporters the government was concerned that putting in place too strict restrictions would push people to rebel.

“Our situation is extremely close” to that in countries with full confinement, he said, adding, though, that the Swiss economy would continue to function partially and people would have some freedom of movement.

“We do not want to engage in a political show,” he said, pointing out that citizens in some countries where confinement is the rule are refusing to get in line.

“What counts is not the 15 or 20 seconds when you make the announcement. What counts from now is how the population adheres to these measures for several weeks to come.

“Slowing the virus spread cannot work if the entire population does not adhere to the measures decided,” he said.

“We are really calling on everyone to take responsibility.”

The announcement came as Switzerland saw its number of cases soar by nearly 1,000 in 24 hours to over 4,800 cases, including 43 deaths.

Worldwide, the pandemic has killed more than 10,000 people, and nearly 250,000 have become infected with the virus since it first emerged in China last December.

The Swiss government has already ordered the closure of schools and all places of leisure, including restaurants, bars and non-food shops, but said Friday more was needed to ensure people observe strict social distancing to halt the spread of the deadly new coronavirus.

“The situation is serious. The coming days will be difficult,” Berset said.

Switzerland on Friday also boosted the amount of money made available to buffer the harsh blow to its economy by an additional 32 billion Swiss francs, bringing the total to 42 billion francs ($42.8 billion, 39.9 billion euros).

Swiss Economic Affairs Minister Guy Parmelin warned that the Swiss “economy is currently functioning at around 80 percent of its capacity.”

“We have to do everything possible to maintain a sufficient level of activity,” he said.