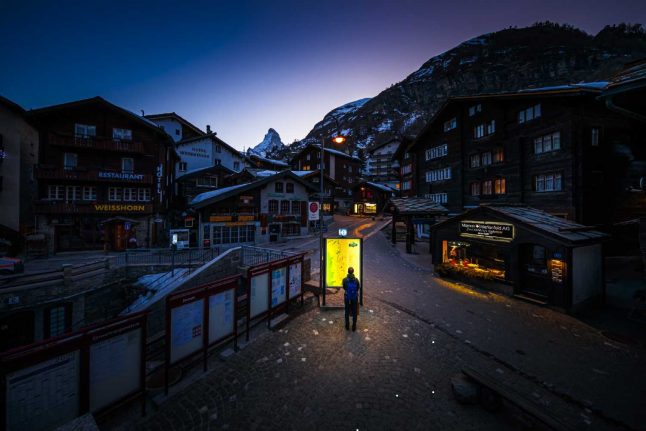 The empty streets of the Alpine resort of Zermatt, Photo: VALENTIN FLAURAUD / AFPa

Since being first detected in the southern canton of Ticino on February 25th, the coronavirus has now spread to all of Switzerland’s 26 cantons.

As at Wednesday, March 25th, Switzerland has more than 10,500 confirmed cases and 149 fatalities.

EXPLAINED: Why does Switzerland have the highest rate of confirmed coronavirus cases per capita?

While the virus has been detected all across Switzerland, some cantons have been much more heavily hit than others.

As discussed here, Switzerland’s testing regime is one of the most extensive in the world – with only three countries (United Arab Emirates, Norway and South Korea) having tested more people per capita.

Switzerland currently tests around 8,000 people per day for coronavirus – and has tested close to 100,000 people since the virus first broke out.

This is one of the major reasons for why Switzerland has a higher number of cases than many other countries who have also been hit by the virus.

While the southern canton of Ticino – which shares a border with Italy – has felt the brunt of the virus, others such as the western cantons of Vaud and Geneva have also felt significant effects.

Note: The situation on the ground in Switzerland can change rapidly. The following figures are up to date as at Wednesday afternoon, March 25th. A statue of Freddie Mercury in the canton of Vaud, Switzerland. Photo: FABRICE COFFRINI / AFP

The canton where the virus was first detected, Ticino, has been one of the heaviest hit in Switzerland – particularly when it comes to fatalities.

Despite having just four percent of the Swiss population, with 60 deaths Ticino has more than 40 percent of Switzerland’s total fatalities.

Ticino moved to close many of its border crossings with Italy as the nature of the outbreak became known, although the border has not been shuttered completely due to the large number of cross-border workers employed in the canton.

An estimated 68,000 workers live in northern Italy but cross the border daily to work in Switzerland – many of whom work in the health sector.

That said, Ticino’s 1,354 confirmed infections – only the fourth-most in Switzerland – shows that non-geographical factors are also relevant in where the virus is detected.

Despite being the furthest cantons away from Italy, Vaud and Geneva have the most and second-most confirmed cases of the coronavirus respectively.

As at Wednesday afternoon, 2,234 cases of coronavirus have been confirmed in Vaud – meaning more than one in five cases in the entire country have been detected in the canton.

A total of 21 people have died in the canton as a result of the coronavirus.

Geneva has 1,510 cases – or just under 15 percent of Switzerland’s total. 12 people have died in Geneva due to coronavirus.

Switzerland’s largest canton, Zurich, has the third-most confirmed cases of coronavirus with 1,363 with seven deaths.

Zurich was the first Swiss canton to equip all of its doctors with coronavirus tests, which may explain the high number of coronavirus infections as well as the relatively low fatality rate.

The other cantons to be heavily hit include Bern (624 cases and six deaths), Valais (544 cases and 13 deaths) and Basel City (466 cases and eight deaths).