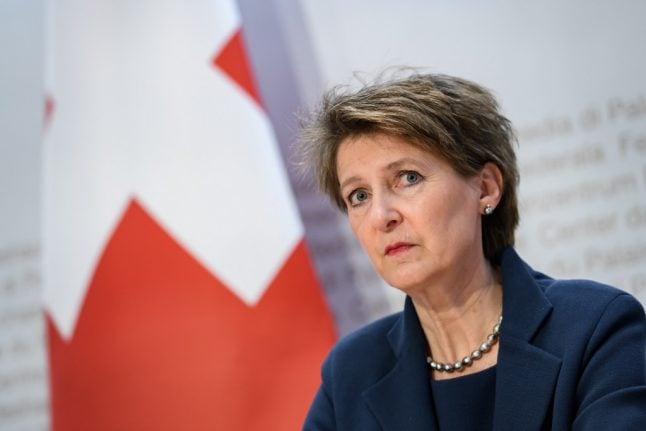 The Swiss president outlined some of the post-confinement measures. Photo by Fabrice Coffrini / AFP

In an interview with the Sonntagsblick newspaper on Sunday, Swiss president Simonetta Sommaruga said that deconfinement will take place in stages and the exact steps now under discussion will be made public on April 16th.

Sommaruga did say that the Federal Council is not planning to keep older people – and those in high risk groups – confined for an indefinite period of time, as suggested by some.

Many business organisations have been urging the government to re-start the economy by deconfining young people while keeping people in at-risk groups under lockdown.

But Sommaruga said that keeping the vulnerable population in confinement for a long time is not realistic.

“It is impossible to completely isolate groups at risk because we are talking about a very large number of people,” the president noted.

“First, there are all those over the age of 65. Then there are those who suffer from a disease such as cancer, diabetes or high blood pressure.

“It is not possible to completely cut these groups off from the outside world”, she added.

Sommaruga also said that “there will be no deconfinement without protective measures”.

Among these measures would be the use of masks in certain circumstances, she said.

Even though Swiss authorities have insisted that masks don’t protect healthy people from being infected with Covid-19, “scientific knowledge about the virus has made enormous progress”, said Health Minister Alain Berset.

“I don't rule out the possibility that, when we relax the rules, we can recommend a mask in certain situations”, he added.

“The government is neither too cautious nor reckless in terms of the measures prescribed, but realistic,” Sommaruga pointed out.

READ MORE: EXPLAINER: Is it really the right time for Switzerland to be lifting restrictions?

The restrictions were put into place on March 16th, when the government declared a state of emergency, closing all schools, most border crossings, shops, restaurants, bars, and entertainment and leisure facilities, and banned gatherings of more than five people.

The measures were supposed to stay in place until April 16th, but the government postponed them until April 26th.

Switzerland now has at least 25,449 cases of coronavirus and 1,115 deaths, according to Worldmeter.

This means Switzerland still has one of the highest incidences of Covid-10 infections in international comparison.

However, the country has a relatively low death rate. According to data from the Johns Hopkins University in the US, 3.9 percent of coronavirus patients in Switzerland die from Covid-19, or 11 deaths per 100,000 inhabitants.