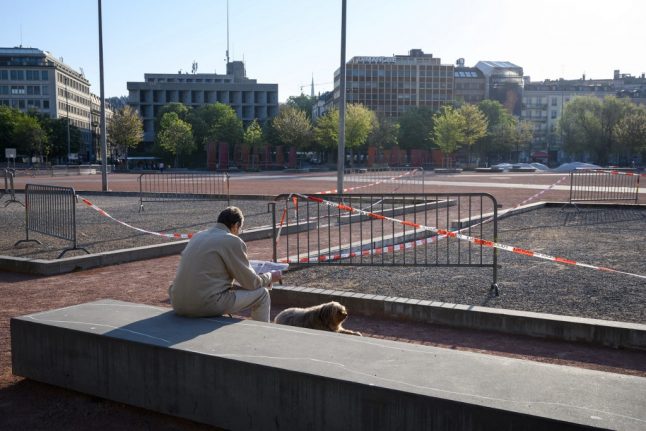 A man reads a newspaper with his dog next to a playfield closed with red-and-white police warning tape in Plainpalais place in Geneva on April 16, 2020. AFP

From the beginning of the outbreak to the present day, the coronavirus has had an uneven impact on Switzerland and its 26 cantons.

As at Thursday, April 16th, Switzerland's confirmed cases of Covid-19 stand at 26,275. The fatality toll stands at 1,242 on the basis of reporting from the cantons.

The impact of the virus has however been much higher in non-German-speaking Switzerland – however the government has said that this is due to situational factors rather than a failing of the cantonal governments themselves.

READ ALSO: Why do Switzerland's French and German speakers disagree about easing of restrictions?

In just three cantons – Ticino, Vaud and Geneva – there have been just under half of the country’s confirmed cases, while the death toll from those three cantons is more than half of Switzerland’s total.

In total, more than two-thirds (68 percent) of the country’s total victims of Covid-19 live in Latin Switzerland, despite these areas accounting for less than a third of the country’s population.

As reported by The Local Switzerland on Thursday, April 16th, the widespread testing in Zurich – compared with a lack of testing in other parts of the country – indicates that the figures are likely to be more accurate in Zurich but much higher in other Swiss cantons.

What is the real count of coronavirus infections in Switzerland?

‘Nothing to do with the actions taken’

The Swiss government has however dismissed concerns that the divergence could be to do with a difference in measures taken between Switzerland’s linguistic regions.

Talking to Swiss media outlet Le Temps on Thursday, the Federal Office of Public Health (FOPH) said the efforts to combat the virus were largely uniform across Switzerland – meaning other situational factors were at play.

“The measures were decided at a federal level when the epidemic was already advanced in different ways in different regions,” a FOPH spokesperson said.

“This has nothing to do with a difference in the extent to which different cantons have taken action.

“They (the cantons in their efforts to combat the virus) are all at the same level.”

There are some factors which may have made Latin Switzerland more vulnerable to the virus than German-speaking Switzerland.

As reported by The Local Switzerland in March, a major reason for the country’s higher than average infection rate has been its reliance on cross-border workers and its proximity to heavily-hit regions, such as those in Italy and France.

While Ticino borders northern Italy – arguably the area of Europe heaviest hit by the virus – Geneva and Vaud border eastern France, which has also been one of the heavier hit French areas outside of Paris and Lyon.

Conversely, while Germany has been internationally lauded for its efforts in curbing the spread of the virus and has one of the lowest mortality rates in the world.

The first case was discovered in Ticino on February 25th and the southern canton would go on to be the hardest hit by the virus.

Ticino, which borders hard-hit northern Italy, has been heavily impacted by the outbreak, counting more than 2,900 cases.

The number of deaths in the canton is now at 263.

The western cantons of Vaud and Geneva have the most infections of any Swiss canton, with 4,700 and 4,400 respectively – more than a third of the country's total cases as at April 16th.

The death rate is also high in these two cantons. In total, 254 people have died in Vaud and 172 in Geneva due to the virus.