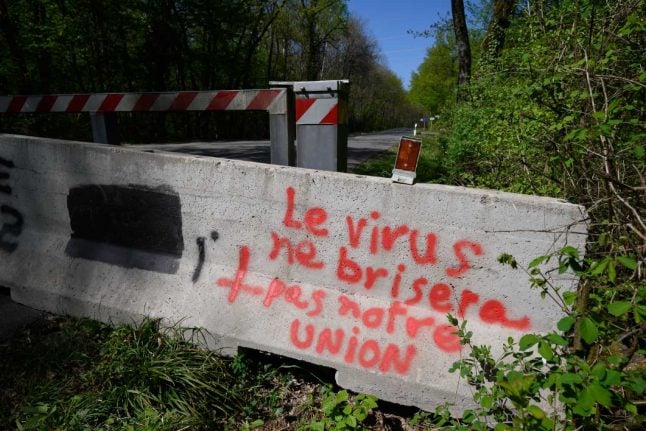 This photograph taken on April 15, 2020, near Collex at a border post between Switzerland and France, shows concrete blocks closing the border adorned with graffiti reading in French: "The virus won't

Closures along Switzerland’s borders – particularly with France, Italy and Germany – have caused havoc for those living along the border, many of whom have been separated from family and friends along the other side.

As yet, the government has given no indication as to when the timeline will be released – or which restrictions would be relaxed first.

On April 16th, the border closures were extended to prohibit cross-border shopping. On May 11th, family reunions will again be permitted – however these were limited in scope.

As reported in the NZZ on Wednesday May 6th, a think tank looking at how to reopen the Swiss economy has called upon authorities to allow all family and work-related crossings to again take place, particular in neighbouring regions which are less affected by the Covid-19 outbreak.

Currently, unmarried couples and extended families are not able to cross the border to see each other.

Representatives in border regions of France and Germany have written to the Swiss Federal Council to relax these restrictions.

Limited family reunions from May 11th

In an official statement issued by the Swiss Government, the Federal Council said entry restrictions into Switzerland would begin to be lifted.

Tourism unlikely in either direction this summer

Relaxation of border controls for tourism in both directions however remain unlikely – even for later in the summer.

Although there are likely to be some relaxations put into place from May 11th, all open Swiss borders will remain monitored and controlled into the future.

Foreign Minister Ignazio Cassis told Swiss residents that trips abroad this summer “”will probably be possible only to a limited extent or not at all”.

The Department of Justice stated that uncontrolled entry needed to be stopped, whether from tourists, uninvited guests or others who did not fit the entry criteria.

Minister Keller-Sutter said she was coordinating efforts with her Schengen counterparts to ensure that border controls were maintained.