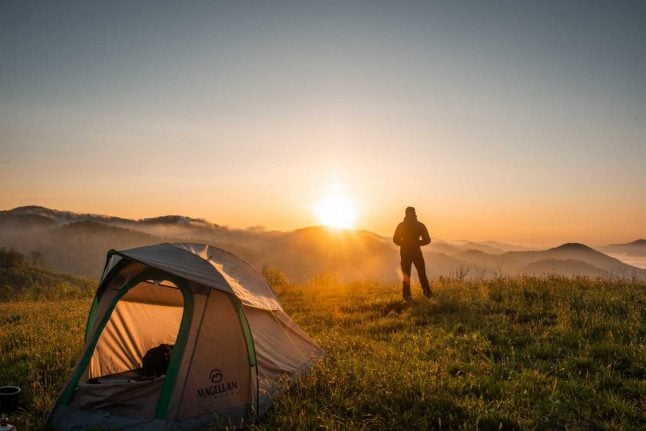 Image: Pexels
With the coronavirus closing international borders the world over, taking summer holidays abroad in 2020 will be more difficult than ever.
This has forced many to consider spending their summer holidays in their own backyard, perhaps for the first time ever.
Coronavirus: Here's how Switzerland's reopened bars and restaurants will look

Although the closed borders might have changed plans for plenty of Swiss, they have forced local tourist operators to work harder than ever to attract Swiss tourists.

More than half of the overnight stays in Switzerland each year are due to foreign tourists, leaving a large hole that travel operators are seeking to fill with local vacationers.

Switzerland Tourism says this gives locals an opportunity to travel closer to home at a comparatively cut price rate.

The closure of neighbouring borders and the cutting of flights has meant leaving the country – something that more than 12 million Swiss residents did in 2019 – will be more difficult than ever.

Keller-Sutter said that for holiday makers unsure of where to go this summer, vacations in Switzerland should be preferred.

“This also helps us to stimulate the economy again.” Camping will be the hot ticket this summer. Image: Pexels

Where will be open and when?

“There should be a lot possible in Switzerland in summer,” said Sommaruga in late April.

As reported in the Tagblatt, Sommaruga is likely to reopen domestic tourism in Switzerland from June onwards.

While hotels in Switzerland were allowed to remain open throughout the crisis, camping sites have been closed.

Camping and caravanning association TCS has been forced to close its 24 sites across the country due to the virus, although they may be allowed to reopen in the next wave of lockdown relaxations from June 8th.

The decision on camping sites will be made on May 27th.

The top destinations for summer

Although Switzerland’s major cities like Zurich, Geneva, Bern and Basel are tourist attractions in their own right, they mainly attract tourists from abroad.

Swiss tourist authorities predict that non-urban destinations will be a hit this summer, with the country’s largely urban-dwelling population looking to socially distance themselves from the hustle and bustle of the city.

As a result, regional areas of Switzerland have already been inundated by requests for the summer.

Beach areas along Switzerland’s lakes are also growing in popularity, as the Swiss swap Spain for the Strandbad and chose the Bains des Paquis over the Ballerman.

Enquiries have been made for the entire summer but the venues are set to be particularly busy around school holiday periods.

Gabriella Rolfo, from Campofelice, told Watson that the uptick in requests and bookings was due to forced changes in plan thanks to the coronavirus, with guests particularly keen on cabins and bungalows.

“We have a lot of inquiries from people who would otherwise have gone abroad,” Rolfo said.

“We find that because of Corona, people are particularly keen to spend their holidays outdoors this year.”