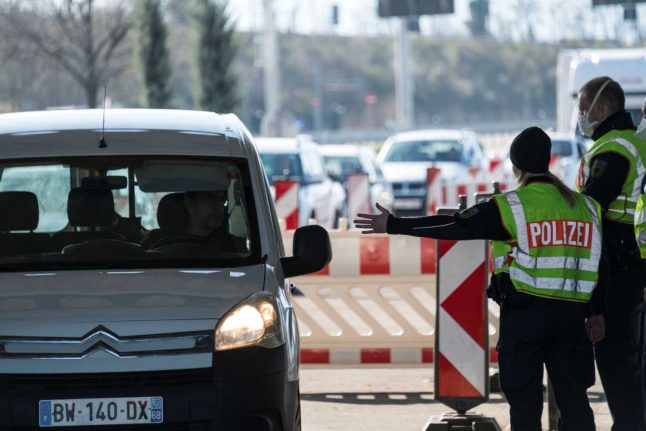 The relaxation only relates to the border controls put in place by Germany, France and Austria.

As yet, Switzerland has not indicated a concrete date when it will relax its border controls – although Justice Minister Karin Keller-Sutter has said she would hope to do so “in the coming weeks”.

The announcement comes with a major caveat however – that infection rates from the coronavirus remain low on both sides of the border.

The Swiss Justice and Police Department (FDJP) said on Wednesday that an agreement had been reached with German authorities around the reopening of the German side of the border. Confirmations with Austrian and French authorities followed.

Swiss authorities said they did not yet have an indication as to when Italy would reopen its borders.

Justice Minister Karin Keller-Sutter said on Tuesday that she hoped to open Switzerland’s borders to visitors from Austria, Germany and France “earlier than expected”.

While no concrete deadline was given, Keller-Sutter indicated that border controls would be lifted “in the coming weeks”.

In a press conference on Wednesday, Keller-Sutter said she was “striving for border openings in both directions by June 15th”.

“The talks with the foreign ministers have shown that we want to get back to normal at the border as soon as possible, if the epidemiological situation allows it. We are aiming for full border opening on June 15 between Germany, Austria, France and Switzerland.”

As reported by Swiss media outlet 20 Minutes, this is expected to include all of Switzerland’s borders besides the southern border with hard-hit Italy, which would likely be delayed.

“Everyone wants the border situation to normalise as quickly as possible,” the spokesperson said.

Infection rates to be monitored

In order for the relaxations to come into effect, coronavirus infection rates will need to remain low.

Authorities will monitor the rates on both sides of the border in order to allow a reopening.

The guideline in Germany is more than 50 infections per 100,000 in the population.

Germany announced that further relaxations of controls with its borders would be put in place from midnight on Saturday, particularly with the country’s border with Luxembourg.

According to Swiss news agency 20 Minutes, German border controls with Switzerland, France and Austria will no longer be systematically checked but will be subject to random controls only from this weekend onwards, before officially ending on June 15th.

Border controls will also be relaxed between Germany and Austria at midnight on Saturday.

Editor's note: In the initial press conference on May 13th, only Germany and Austria were included in the opening plan. The story was amended to account for France's later inclusion on May 14th.