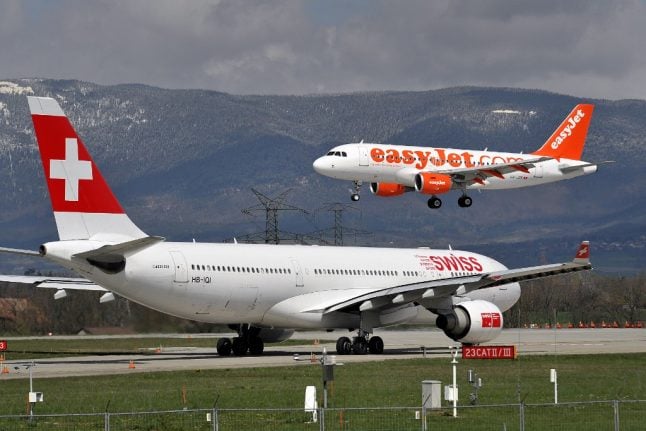 Flying, at least in the foreseeable future, may not be the same as we were accustomed to before the coronavirus pandemic struck.

On top of the already existing security measures, social distancing and extra precautions both on the ground and in the air will be implemented when airlines, which have been grounded since mid-March, start flying again in June.

New measures for Zurich, Geneva, and Basel airports, as well as for Switzerland-based airlines are outlined in a 30-page document from the Federal Office of Public Health (FOPH), reprinted in the SonntagsZeitung on Sunday.

READ MORE: Swiss airline to resume some flights in June

Checking passengers' temperature at the airport

Temperature sensors could be used at Swiss airports to detect body temperature higher than 38C.

So far, Switzerland has waived such tests as an entry and exit condition.

However, Alitalia is already measuring the temperature of passengers at Zurich Airport on the instructions of the Italian government. Passengers with a fever are prohibited from entering the aircraft.

Those with a medical certificate should be able to cancel or rebook their trip free of charge up to six hours before departure.

Rules on carry-on luggage are also likely to change on flights from Switzerland. For instance, Emirates Airlines has already decided that hand luggage should now be checked in. Only “important items such as handbags, briefcases or baby items” are allowed in the cabin.

Waiting in front of the toilet on board, as is usually the case on long-haul flights, may no longer be tolerated. Social distancing on an airplane is generally difficult to maintain, especially when passengers crowd in front of the lavatory.

There should also be no legs stretched out in the aisle, and especially on short-haul flights; drinks and snacks will no longer be served; and duty-free sales on board may also be banned.

One of the proposed measures is that airlines must not allow their passengers to remain in a delayed aircraft for more than half an hour.

What about social distancing?

There has been much talk about airlines eliminating the middle seats, but Switzerland's airlines SWISS, Edelweiss and Helvetic have not committed to taking this drastic step in their Economy cabins, which would cause ticket prices to skyrocket.

However SWISS is recommending that passengers wear masks on board until at least August 31st, and also use them at the airport before or after flights, “whenever sufficient social distancing cannot be adequately observed”.

As a reminder, FOPH said that passengers seated in the same row as an infected person, or in the next two rows, are at risk of contamination, regardless of the duration of the flight.

However, people who merely travelled on the same plane as a contaminated person, but were seated more than two rows in front of or behind, and had no other contact with that person, are in principle safe from infection.

The Swiss government has announced masks will be required on all planes – regardless if they are commercial, private or charter – from Saturday, August 15th.

Currently masks are required on board most commercial airliners, however this has been a policy put in place by the airline companies rather than as a requirement of the Swiss government.

Now, passengers on all aircraft flying within, taking off from or landing in Switzerland will be required to wear masks – mirroring similar rules on all modes of public transport across the country.

Coronavirus: What can passengers expect at Swiss airports and on planes?

As for face protections on ground level, Geneva Airport has put in place a mask requirement on its premises.

Some cantons, including Geneva, Jura and Vaud have required masks in supermarkets and shops, however this has not been made uniform federally.

COVID-19
Switzerland: How likely is another Covid-19 wave this fall?
Url copied to clipboard!