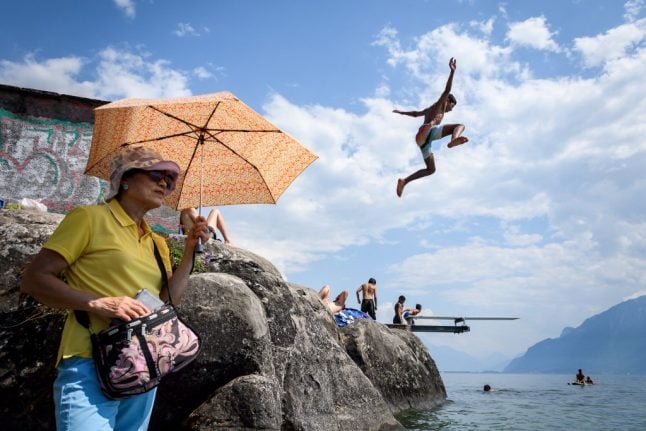 Experts say life is likely to be track in the summer, as here, on Lake Geneva. Photo: Fabrice Coffrini/AFP

Obviously, nobody knows for sure how the situation is going to evolve, but health authorities and scientists are offering some glimmers of hope for the weeks ahead.

“The number of new infections is low, and this allows us to look at the next few weeks and months with some serenity. Life is back on track,” Swiss Health Minister Alain Berset said in an interview.

Although the public “should not give in to euphoria, summer could be more festive than expected”, he added.

Just over one week after the reopening of schools and shops, “the Covid-19 situation in Switzerland is undoubtedly a source of relief and satisfaction. Relief because we avoided the dramatic scenario that Italy had to face. Satisfaction because light at the end of the tunnel is now in sight”, Swiss biologist and researcher Alexandre Kuhn wrote on the Heidi News site.

He credited the positive evolution to the public's compliance with the Federal Council's policy of 'flexible confinement' that “allowed us to tame the first epidemic wave”.

Looking ahead, Switzerland could experience one of the three possible scenarios this summer, Kuhn said.

In the first scenario, the number of new infections will continue to decrease until the virus fades. “However, given the gradual resumption of mobility and low collective immunity, this scenario does not seem to be the most likely,” he pointed out.

Another possibility would be a resurgence of contaminations, as Swiss and European governments are stepping up their timetable for lifting lockdowns and re-opening borders.

“This could lead to a significant number of new infections,” Kuhn said.

READ MORE: Covid-19: How severe will the second wave be in Switzerland?

The most likely scenario, according to Kuhn, is that “we will continue to maintain current levels of new daily cases. This balance may, however, critically depend on the work of contact tracing teams and their ability to effectively prevent infections”.

He also said that new pockets of infection are expected to increase in Switzerland in the coming weeks, so tracking of new cases would be very important. Contact tracing is believed to be an effective strategy for breaking transmission chains and controlling the spread of disease.

The new SwissCovid app will be introduced throughout Switzerland before the end of June, the government announced last week.

Kuhn added that while the authorities have been managing the outbreak satisfactorily, “in retrospect it is clear that if the government had acted a few days earlier, it could have significantly reduced the burden of the Covid-19 in Switzerland”.

“With this in mind, it can be expected that authorities can better anticipate the next phase of the epidemic, and react less reactively to it,” he added.