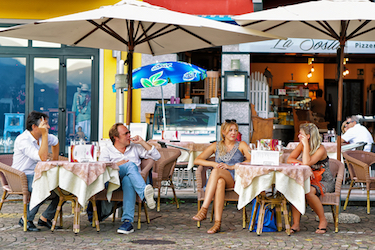 The government permitted bars and restaurants to resume their business on May 11th, ahead of the originally scheduled re-opening on June 8th.

It authorised the sector to resume its operations earlier than planned after the hotel and restaurant association, GastroSuisse, complained that the industry was facing financial difficulties.

But in giving the green light to the early re-opening, authorities stipulated that restaurants must implement appropriate protection measures, including spacing of two metres between tables and not more than four people at each table, except for families with children.

These rules were mandated to keep the risk of contamination to a minimum.

About 75 percent of the country's restaurants have re-opened in the past two weeks in compliance with the rules.

However, GastroSuisse president Casimir Platzer asked the Federal Council to reduce the authorised distance between each table and eliminate the limit of four people per table, “because business under current restrictions is not profitable”, he said in an interview with the RTS television.

READ MORE: 'It's too early': Are people in Switzerland ready to return to bars and restaurants?

Platzer suggested that the distance between tables could be reduced to one metre, as is the case in Austrian restaurants.

However, while bringing the tables closer together and allowing more people to sit together may make business sense, health experts say that from the epidemiological perspective it could be risky.

Speaking with the RTS, Didier Pittet, the head of the infection prevention and control service at Geneva's University Hospital (HUG), stressed that the two-metre safety margin corresponds to the social distancing criteria established in Switzerland, even though it is more than in many countries.

“We know that the virus is rarely, if ever, transmitted beyond one metre. So we could envisage reducing the required distance between tables,” he said.

But he pointed out that if people inadvertently get closer to each other, “say within 80 centimetres or less, they will be entering the danger zone”.

He also explained that having only four people sit at a table makes it easier to track the transmission chain in case of infection.

“With larger groups, contact tracing is more complicated,” he said.

The Federal Council is expected to discuss the possibility of further easing of restaurant restrictions this week.