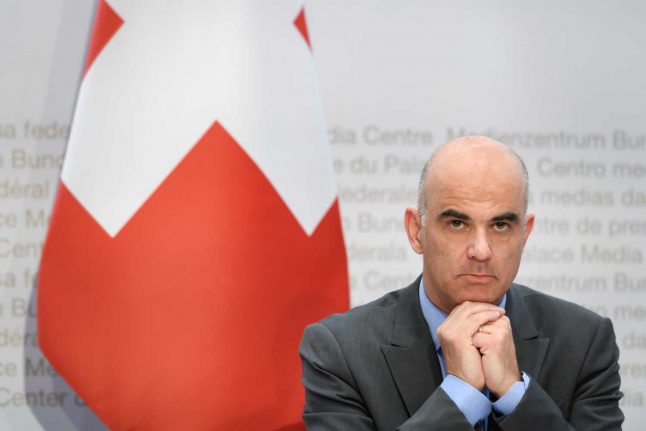 Swiss president Simonetta Sommaruga told the media “Switzerland is reborn”, saying “we now know it is possible to control the virus”.

Berset also announced that the state of emergency, first declared on March 16th, will officially end on June 19th.

While not an official rule, the government has recommended that working from home be encouraged by businesses wherever possible.

In addition, commuters are encouraged to avoid peak times.

There will however be no compulsory mask requirement in Switzerland, with Sommaruga saying “We rely on the personal responsibility of the population.” Groups of up to 30 people will again be allowed to meet in public places from May 30th, increasing from the current limit of five.

The maximum number will be higher for events. From June 6th, groups of up to 300 people to be allowed for protests, trade fairs, private events and ceremonies, theatre performances and film screenings.

People at these events will however be required to keep a distance of two metres at all times.

Demonstrators will need to apply for a permit and will need to explain how they plan to minimise the spread of the virus.

Groups of up to 1,000 people will be allowed at sporting events from July, however venues will need to provide indications as to how they will ensure that social distancing requirements are met.

Pursuant to the current regulations, groups at restaurants in Switzerland cannot exceed four, and there is a voluntary requirement that all customers provide their data so that they can be tracked and contacted in the event of an outbreak.

According to the report, the maximum of guests per table will be scrapped – but larger groups will be required to register, with the information of each attendee to be kept.

A distance of two metres between groups remains mandatory.

Complete lists of those in attendance must be kept.

Middle schools, vocational schools and universities will again be allowed from June 6th.

Training for all sports will again be allowed from June 6th, regardless of group size.

All sports – except those with a high level of contact – will be allowed to train again.

The one requirement is that a list of those in attendance must be kept.

Berset announced that the next round of lockdown relaxations will include discos and nightclubs.

Although the risk of transmitting the coronavirus would appear high in nightclubs, the Swiss government is expected to require establishments to adhere to a range of distancing and hygiene rules.

This is set to include a maximum of 300 people at each establishment, while the NZZ reports that patrons will also be expected to keep two metres apart at all times.

Nightclubs – along with all bars and pubs – will also have to close at midnight.

However, as reported by Swiss media outlet Watson, clubs will again be allowed to open at 6am – enabling after hours parties.

Complete freedom of movement will be restored in and out of Switzerland by July 6th at the latest.

From June 8th, applications from EU/EFTA workers will again be processed. Swiss companies will also be allowed to hire workers from non-EU/EFTA countries provided they are in a highly-skilled category, and this is either in the public interest or there is an urgent need.

One further issue to be discussed is the fate of Switzerland’s southern border.

Italy unilaterally announced on May 17th that it would be opening its borders on the June 3rd – much to the surprise of Swiss authorities.

Switzerland said today that the border with Italy will not be opened on June 3rd.

Karin Keller-Sutter said during the press conference that she respected Italy's decision – but the border opening would not be reciprocated.

“Of course we are also in contact with Italy. It had announced that it would reopen its borders to tourists on June 3. We respect this sovereign decision.”

However, Switzerland and other neighbouring countries in Italy want the reopening to take place in a coordinated manner. We will not open our borders with Italy on June 3rd.”

Therefore, if Italy does open the border earlier, it would be possible for Swiss residents and citizens to cross into and back out of Italy from June 3rd. Italian residents would however not be able to cross into Switzerland. Campsites, swimming pools and leisure facilities such as rope and climbing parks can reopen on June 6th.

From June 6th, brothels and sex work is again allowed to take place.

Seniors have been encouraged to again resume their social life, while grandparents may also babysit their grandchildren once more.

When will the next round of lockdown relaxations be made?

On June 24th, the Federal Council will announce further relaxations – including whether larger events are to be allowed. Currently, events with more than 1,000 people are banned until August 31, 2020.

Whether in terms of politics, social system or economy, the Swiss often chart their own course, which fundamentally diverges from that of its European neighbours.

Healthcare is no exception.

The differences lie primarily in who finances the scheme — public versus private — and how the overall system functions.

Like much of the European Union, Switzerland has a universal health system, which means everyone in the country is covered by insurance and has access to medical care.

In most countries, the government typically has control, to a lesser or greater extent, over funding, health insurance, and health providers.

In Germany, health costs are shared by employers and workers, with employees paying 7.5 percent of their salaries into a public health insurance fund, and companies matching that amount.

Italy’s national, system, called the Servizio Sanitario Nazionale, or simply SSN, which is financed mainly though federal and regional taxes, automatically covers all residents. Medical care is largely free of charge at the point of service.

Public healthcare also exists in Austria, with certain portions of salaries being automatically deducted to fund the scheme. However, healthcare is free of charge for low-income people or those who who are disabled, studying, or retired.

Although no longer part of the EU, the UK health system is also based on state healthcare via the NHS. It is funded by taxes which account for about 4.5 percent of the average citizens’ gross income.

The system here is fundamentally different in that it is not tax-based or financed by employers, but rather by individuals themselves.

Basic insurance — KVG in German and LaMal in French and Italian — is compulsory in Switzerland. It doesn’t come cheap — premiums are based on the canton of residence and age, costing 300 to 400 francs a month on average — but it is quite comprehensive; it includes coverage for illness, medications, tests, maternity, physical therapy, preventive care, and many other treatments.

There are no employer-sponsored or state-run insurance programmes, and the government’s only role is to ensure that all insurance companies offer the same basic coverage to everyone and that they have the same pricing.

While companies can’t compete on prices or benefits offered by the basic compulsory insurance — which are defined by the Health Ministry — they can, and do, compete on supplemental polices which offer perks not included in the basic coverage.

All policies have deductibles (also called co-pays) that can range from 300 to 2,500 francs a year.

After the deductible is reached, 90 percent of all medical costs will be covered by insurance, with 10 percent being paid by the patient; however, this co-pay is capped at 700 francs a year for adults and 350 francs for children under 18.

The government does subsidise healthcare for the low-income individuals and households – defined as those for whom insurance premiums exceed 10 percent of their income.

What percentage of a person’s income goes to health insurance premiums?

This depends on wages and premiums, for instance, whether a person chose the cheapest option with a high deductible or the expensive one with a 300-franc deductible.

Generally speaking, however, based on the average monthly income of just over 7,000 francs, about 6.5 percent is spent on premiums.

What happens if you don’t take out an health insurance policy?

Anyone who arrives in  Switzerland must get insured within three months. If you don’t, the government will choose one for you and send you the bill. If this happens you may end up with more expensive premiums than you might have gotten if you shopped around yourself.

If you are still delinquent on your payments, your healthcare will be restricted to emergencies only; any other non-urgent medical treatment will be denied, unless you pay for it out of pocket.

The pros and cons of the Swiss system

Let’s look at the ‘cons’ first. Basically, there is one: the cost.

Not only are insurance premiums high and steadily increasing, but, at 7,179 francs per capita, Switzerland has the third most expensive healthcare scheme in the world — behind only the United States ($12,318) and Germany ($7,383).

Unlike taxpayer-funded models, there is no price grading according to income, so people on a low income pay a high proportion of their income for healthcare than higher earners.

However, the system is generally efficient, has an extensive network of doctors, as well as well-equipped hospitals and clinics.

Patients are free to choose their own doctor and usually have unlimited access to specialists.

READ MORE: EXPLAINED: How to see a specialist doctor in Switzerland without a referral

According to a survey by the Organisation  for Economic Cooperation and Development  (OECD) on how long patients in various countries typically wait for an appointment with a specialist, the share of people in Switzerland waiting a month or more is 23 percent, compared to 36 percent in France, 52 percent in Sweden, and 61 percent in Norway.