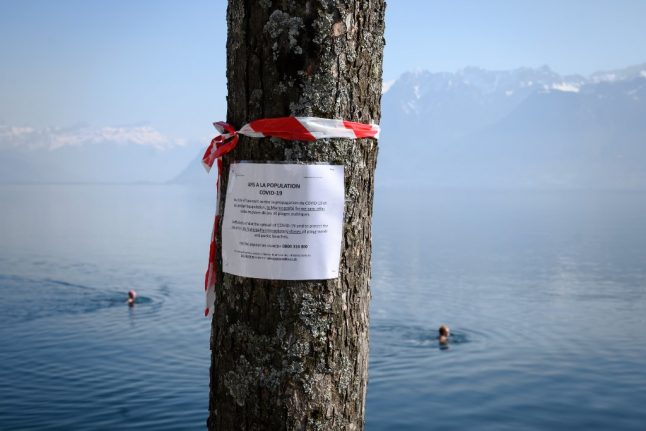 Keeping distance and complying with other health measures may protect us if the second wave hits. Photo by AFP

Is the second wave unavoidable?

We are dealing with an unknown virus and nobody knows for sure how it will evolve in the weeks and months ahead.

Scientists think the virus is still circulating, and since the level of immunity among Switzerland’s population is believed to be only 10 percent, the risk of infection is high.

The big unknown right now is what effect the gradual loosening of the measures will have on the infection rate.

What are some of the main theories being currently advanced by Swiss scientists?

There are different opinions about the severity of the second wave, with predictions ranging from grim to moderate.

The bleakest forecast comes from the researchers at the Polytechnic Institute in Lausanne (EPFL), who predict that during the second wave, several million people in Switzerland could contract Covid-19. That is a much higher number than nearly 31,000 officially infected throughout the country since the end of February. Although the real number is likely higher given that not everyone with symptoms was tested.

However, Didier Pittet, the head of the infection prevention and control service at Geneva's University Hospital (HUG) has a more positive outlook in regards to the second wave.

“If we continue tracking the virus to control infections, and if the population continues to comply with hygiene and distancing measures, we might have only minor waves during the summer,” Pittet said in an interview on Léman Bleu television station.

But the situation may become more problematic in the fall, as other respiratory viruses, including the flu, will also circulate during that season, Pittet said.

Marcel Tanner, a member of Switzerland’s Covid-19 scientific task force, has a theory similar to Pittet’s, but his outlook is even more optimistic.

He said he is convinced that there won’t be a second wave. Instead, we can expect repeated local outbreaks of infection, but they will not reach the scale of the current health crisis.

People concerned about the resurgence of the pandemic “should relax,” Tanner said in an interview with a Swiss media outlet on Thursday.

He noted that localised flare-ups will not turn into a major health crisis because the country is now much better prepared to manage the disease.

“Before the shutdown, there was no system for monitoring the individual infections. They couldn't be found”, Tanner said.

But now health authorities are better equipped to control the spread of the disease by contact tracing, so that infected people can be found quickly and put into quarantine.

READ MORE: What have Swiss authorities learned from the first wave of the coronavirus epidemic?

Swiss researchers at ETH Zurich however have mapped a model that suggests a second wave of Covid-19 in Switzerland could ill 5,000 people.

Researchers, who based their findings on figures from the cantons, said a second wave of coronavirus would spread more slowly than the first wave.

This is primarily as the public is now aware of the necessary distancing and hygiene measures to be undertaken.

READ MORE: Covid-19: How severe will the second wave be in Switzerland?

According to the model, this would result in far fewer infections than in the first wave – meaning that hospitals were less likely to be overloaded.

The researchers found that a major factor in underpinning the deadliness of a second wave was complacency among the population, particularly where this led to members of the public no longer following social distancing and hygiene rules.

Head researcher Dirk Mohr said in a statement that authorities needed to be ready to put distancing requirements back in place immediately – while the public also needed to be aware that the battle has not yet been won.

“If the public doesn't actually see the strain on the capacity of hospitals, people might not take the threat seriously or understand why restrictive measures are necessary.”

Koch told Swiss media the public should not be lulled into a false sense of security due to the low number of cases – and reaffirmed that there was a need to keep some distancing and hygiene requirements – in particular the ban on large events.

“If an infected person is in the crowd, you suddenly have hundreds or thousands of people who have been infected,” Koch said.

Is there anything each of us can do to prevent another outbreak?

Tanner said that newly-acquired habits, such as handwashing and keeping a two-metre distance between people, contributed to the sharp decline in the number of infections and deaths in Switzerland.

He pointed out that if the public continues to practice these protective measures even after the lockdown restrictions are lifted, we should be able to avoid a massive second wave of infections.

“If we do it right, we can live with the virus”, Tanner added.

And HUG’s Pittet said that in order to prevent the comeback of the disease, or at least keep it manageable, “we will have to be extremely vigilant in detecting new cases and putting them in quarantine”.