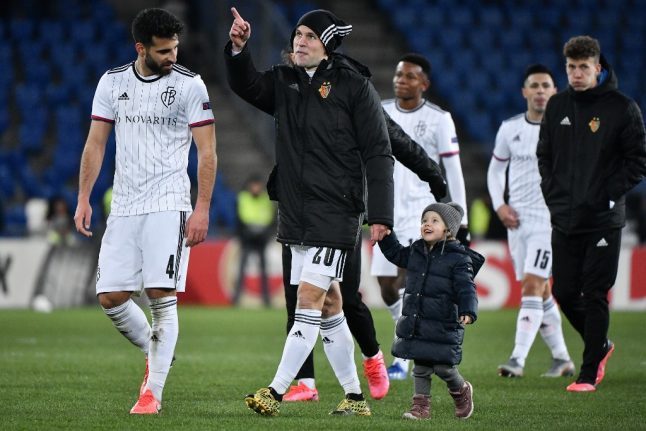 Football will again be allowed in Switzerland in June. Photo by FABRICE COFFRINI / AFP

Cultural and some recreational venues will re-open on June 6th

Also on June 6th, the current limit of the gatherings of no more than five people will be lifted, with up to 30 persons allowed to get together.

In restaurants and bars as well the limit of four people per table will be lifted. Larger groups will be allowed, but one person per table will be mandated to leave their name and phone number with the restaurant staff, so that they can be notified if an outbreak of Covid-19 is subsequently detected.

However, the distance of at least two metres between tables will still be required.

On June 8th, post-obligatory education, such as secondary schools, vocational training, and universities, will resume, following the re-opening of compulsory schools on May 11th.

Groups of up to 300 people will be allowed to gather, provided they respect distance and hygiene measures.

The border with Austria will also re-open on June 8th.

Also starting from June 8th, Switzerland will again process all applications from workers from European Union (EU) member states or the European Free Trade Association (EFTA). In addition, Swiss companies will once again be able to hire highly qualified workers from third countries when their activity is in the public interest or when their engagement meets an urgent need.

On June 15th, borders with France and Germany will reopen.

But Switzerland’s border with Italy will remain closed for the time being.

Also on June 15th, Geneva and Zurich airports will gradually increase the number of international flights.

Swiss and EasyJet will step up their activities from that date as well.

Wearing a mask will still be recommended at airports and on board planes.

Football will resume on June 19th

Up to 300 spectators will be allowed to gather to watch the game, but crowds of more than 300 people are banned until August 31st.

The first match on June 19th is provisionally scheduled to take place behind closed doors at the Stade de Suisse in the capital Bern between title-challengers Young Boys and visitors FC Zurich.

Up to five substitutions permitted per match to reduce the risk of player injury.

READ MORE: Coronavirus: Football in Switzerland to kick off again on June 19

Due to the coronavirus pandemic, some cantons have extended the tax filing deadline this year from March 15th to June 30th.