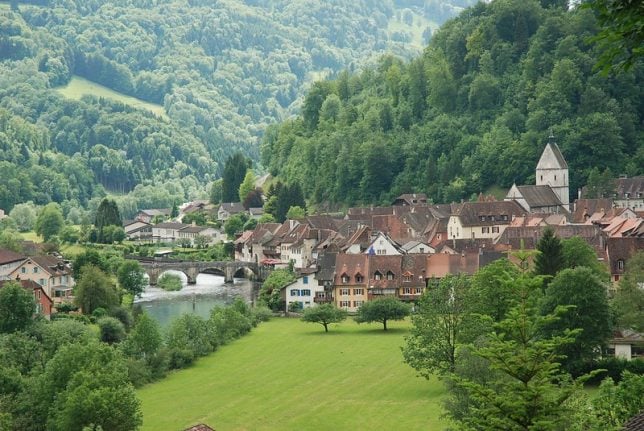 Vasile Cotovanu/flickr
But you probably want to avoid overcrowded places, especially as tourism is expected to pick up in the weeks ahead.
The Local chose five quiet, out-of-the-way places in each linguistic region that are truly stunning. But pssst, don’t tell anybody!

As legend has it, this little town on the banks of the river Doub in the canton of Jura was founded by the Irish monk Ursicinus, the first to arrive to this isolated spot in the 7th century. A grotto where he reportedly lived the life of a hermit is a good place to start the visit. Among other the things to see here is the medieval architecture dating from the 12th to the 14th century — the collegiate church with its cloister, the four-arched bridge, the ruins of a castle, and the stone façades of the old buildings that densely line the streets.

You couldn’t get farther off the beaten track even if you wanted to. That’s because his impressive 170-metre-long pedestrian suspension bridge hangs 100 metres above the Trift Gorge in the Bernese Oberland. The view beneath is amazing, and you can also see a glacier alongside Alpine peaks. Hidden away in Ticino's historic Verzasca Valley, Corippo has the distinction of being Switzerland’s smallest village (population:12) You may think it won’t take you very long to visit this rustic hamlet. But it will probably take some time to wander along all the narrow cobblestone paths and admire the centuries-old slate-roof stone houses, which, interestingly, are all oriented in the same direction.

This winegrowing area located on Lake Geneva’s north shore in the canton of Vaud blends countryside and historic towns and villages overlooking the vineyards, the lake, and the Alps on the French side.

Among the quaint and charming towns to explore in this region are Morges, Aubonne, Rolle, and Nyon, as well as old, winegrowing villages of Féchy, Vinzel, and Tartegnin.

The mountainous region of Graübunden / Grisons is full of beautiful small villages nestled in the Alps.

Bergün is just one of those quiet gems. A typical small mountain village, Bergün lies over the Bernina route, leading high up to glaciers and over old viaducts.

The village has several interesting architectural landmarks. One of them is the church, constructed in 1188, as well as the square Roman tower which was originally built for escape and defense.