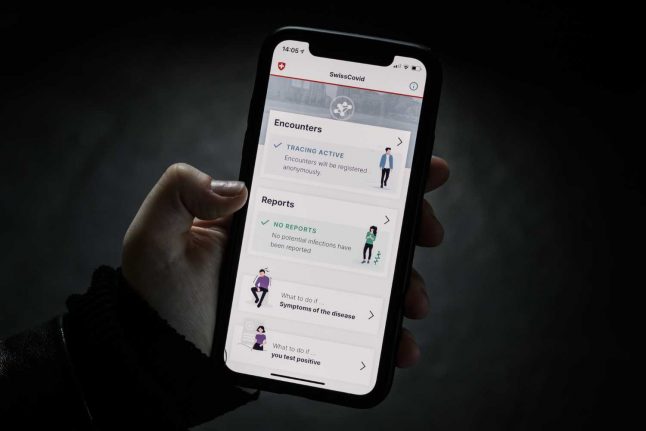 The interface of the SwissCovid app. Photo: FABRICE COFFRINI / AFP

Swiss researchers from the Swiss Federal Institutes of Technology in Zurich (ETH) and Lausanne (EPFL) have developed a contact tracing app which has been released on Thursday, June 25th.

The app received final parliamentary approval on Friday June 19th and is regulated by the Data Protection Act and the Epidemics Act.

It has been given the name 'SwissCovid'.

The Swiss Federal Office of Public Health hopes the app will curb the spread of the virus by allowing for the tracking of infection chains.

On Wednesday, June 24th, the Federal Council agreed to cover the costs of coronavirus tests for anyone who receives a warning notice via the app. A trial version of the app is available from Google and Apple, although the general public is encouraged not to use it until the trial phase is over.

Why was the app delayed?

Originally, the app was to be released on May 11th but it is now not expected until the end of June at the earliest.

The main reason for the delay was that the government wanted to ensure the app complied with data protection laws, while changes to the Epidemic Act also needed to be made.

Another reason for the delay was that the government needed to wait for Google and Apple to finish their bluetooth interfaces for contact tracing. What do users need to do?

Once the app is installed, all users need to do is make sure their phone – and bluetooth – are switched on.

In a decentralised system, the information is stored on users phones rather than in a database. Information is deleted automatically after three weeks.

Location data is not stored as bluetooth only determines how close phones are to each other, not where they are in Switzerland – this is why bluetooth rather than GPS has been preferred.

Will it work outside Switzerland?

Although other countries are working on their tracing apps, as yet SwissCovid will only have limited international compatibility.