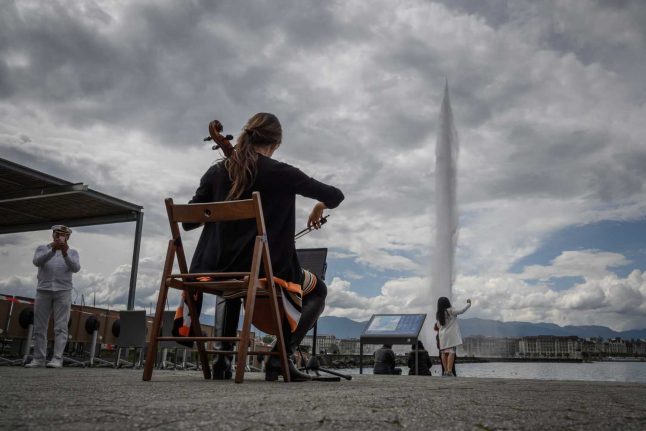 This article was updated on June 18th.

Other than large gatherings and events like music festivals and sporting fixtures – as well as distance requirements in most bars, restaurants and shops – things have an appearance of normality across Switzerland.

READ: What you are allowed to do in Switzerland again as of June 6th

On June 17th, Professor Matthias Egger, the President of the Research Council and head of the Covid-19 Task Force, told SRF that Switzerland’s r-rate had again risen above 1.

On the evening of Wednesday, June 17th, the official r-rate was at 1.1 in Switzerland.

This rate is an average across the country and does not take into account regional variations.

Egger said any further relaxations of the coronavirus lockdown measures should be avoided until the rate was again under control.

Swiss authorities are set to meet on June 19th to discuss a further easing of measures, with Health Minister Alain Berset expected to relax the 2-metre distance requirement, replacing it with a 1.5-metre requirement.

That’s the number of new cases in the 24 hours to June 18th in Switzerland. After a slight decline in the average daily new infections in June – including several days in single digits – the rates have increased slightly.

There has been an average of 20 cases per day for the past week leading up to June 18th.

The total number of detected cases of the virus since the outbreak began.

Detection of a coronavirus infection depends on testing, which means that the actual cases in the community must be higher.

A total of 461,128 tests have been performed in Switzerland, of which 8 percent were positive.

The number of coronavirus deaths in Switzerland as at June 18th according to reporting from the cantons.

Of the 1,581 deceased persons for whom the data are complete, 97 percent suffered from at least one preexisting disease.

According to cantonal figures, more than 28,100 people have contracted the virus and healed as at June 18th – although as Patrick Mathys, Head of the Crisis Management and International Cooperation Section of FOPH, has said previously, Switzerland itself does not release official figures of those who healed from the virus.

“With flu, we don't ask ourselves this. It's basically simple: either you die from the coronavirus or you recover.”

The official end date of the state of emergency in Switzerland, as announced by Health Minister Alain Berset on May 27th.

The state of emergency was first declared on March 16th.

This is the date when the state of emergency will end in the southern Swiss canton of Ticino.

Ticino, which shares a long border with northern Italy, has been the hardest hit canton on a per capita basis.

In addition to a longer state of emergency period, Ticino was also the last to emerge from the lockdown restrictions. According to a study released on Thursday, only six percent of Swiss commuters wear masks on public transport.

The researchers found that 94 percent of passengers travelled without masks. The most obedient passengers were in Lausanne, where approximately eight percent wore masks.

Which cantons have been hardest hit?

All of the 26 cantons in Switzerland have recorded cases of the coronavirus. All but two – Obwalden and Appenzell Ausserrhoden – have seen fatalities.

The latest figures confirms that there have been more than 31,180+ cases and 1,950+ deaths since the outbreak began.

The interactive map below shows which cantons in the country currently have the most cases and fatalities.

Note: Due to the way in which the virus numbers are reported – sometimes directly via the cantons before requiring centralised approval in Geneva – there can occasionally be discrepancies.