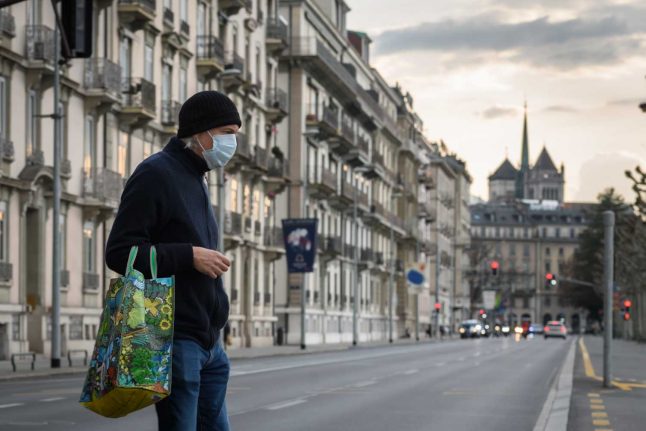 A man wearing a face mask uses a pedestrian crossing in front of Saint-Pierre Cathedral in Geneva on March 20, 2020. Photo: FABRICE COFFRINI / AFP

In a press conference on Wednesday, the Swiss government announced the surprising turn – more than two months after masks were made compulsory on public transport in all of Switzerland’s neighbours.

As yet, masks will not be compulsory in shops or supermarkets in Switzerland.

In June, Switzerland put in place its first mask requirement which applies to protests.

'To avoid a second wave'

Switzerland has for months been reluctant to make masks compulsory, despite this being the case in Germany, Italy, France and Austria for months.

Health Minister Alain Berset said during a press conference on Wednesday that the new requirement was needed, particularly with the continued increase in infection numbers across the country.

“With the increasing numbers, we have observed a new trend: We find that the numbers are increasing slightly again. At the same time, the emergency is over and the cantons and the Confederation share responsibility for this development,” he said.

“We found that our neighbouring countries have stricter rules than we do,” says Berset. “Because of the increasing number of cases, we have decided to introduce the national mask requirement to prevent a second wave in Switzerland.

“So far, we have weathered the situation well with the entire population. It is therefore very important that the distance and hygiene rules continue to be observed and that the contact details are given

“We stand together to continue fighting the epidemic.”

Why no immediate mask requirement?

Swiss President Simonetta Sommaruga explained the five-day waiting period until the requirement came into place, saying it was necessary to give transit companies time to adapt.

The transport companies need a minimal amount of time. It will take you a few days to implement this. Fines or sanctions are not distributed, but it is a duty to abide by the mask requirement.”

What modes of transport will it apply to?

The mask requirement will apply in all trains, trams, buses and on cable cars. Transport on ships and ferries will also be included.

The mask requirement will not apply on ski lifts/chair lifts.

Was a mistake made in waiting so long?

Asked at the press conference if the Swiss government erred in waiting to put the mask requirement in place, Berset said it was only necessary now as more and more people came back to using public transport.

“When everything was closed, it made no sense to impose a mask,” he said.

“We never said that masks don't protect. Now that more people are on the road again, it makes sense to wear a mask where the distances cannot be maintained.

Why not in shops, clubs or elsewhere?

Berset said it was the responsibility of the cantons to put in place mask requirements in nightclubs, while in shops masks would remain recommended rather than required.

“With the clubs, responsibility now lies with the cantons. A mask requirement in the club is one possibility. Closing clubs is also a measure that the cantons can now take.”

“You can keep your distance in the fresh air, there is no need for a mask. Masks must be worn at demonstrations.”