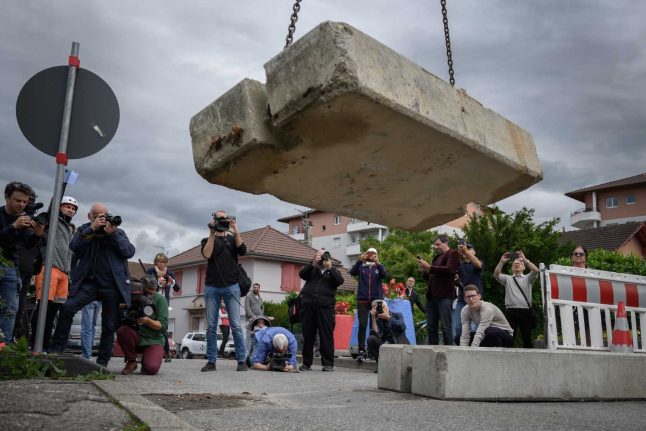 A barrier is removed on the Swiss-French border. Photo: FABRICE COFFRINI / AFP

So who is allowed to enter Switzerland and under what circumstances? That all depends on where you are arriving from.

Since June 15th, travel between most European countries has been re-opened, but some restrictions are still in place for travellers from outside Europe from entering Switzerland.

There are also quarantine requirements for arrivals from so-called ‘high-risk’ countries.

From August 3rd, unmarried couples have been again allowed to enter Switzerland – provided they can prove the relationship to authorities.

Beginning in June, Switzerland – in tandem with the European Union – has begun to slowly wind back border controls.

As The Local Switzerland reported in June, travel to most other European countries was again allowed from June 15th onwards.

In the vast majority of cases this has been done pursuant to a reciprocal arrangement – meaning that residents of these countries are also allowed to enter Switzerland.

The main issue here is whether these countries are subject to a quarantine.

Currently, there is a list of 66 ‘high risk’ countries or regions. Arrivals from these countries must quarantine for ten days in Switzerland on arrival.

For more information on the quarantine requirement, read our explainer. A barrier is removed on the Swiss-French border. Photo: FABRICE COFFRINI / AFP

Travel to and from ‘third countries’

Those from outside Europe – known as ‘third countries’ – are restricted from entering.

This means that anyone without European citizen/resident status will not be permitted to enter, with some limited exceptions.

READ: What you should know before you travel abroad from Switzerland

As has been much publicised, this does not include the US.

While Switzerland is not an EU member, it has up until this point largely mirrored the decisions of the EU when it comes to border openings.

The family members of EU/EFTA citizens or residents will be allowed to enter, regardless of their nationality status.

There are some exceptions for work travellers, although this travel must be essential – i.e. it needs to take place in person – and special approval must be granted.

Anyone needing this approval must contact Swiss authorities at [email protected]

As of August 3rd, members unmarried couples can enter if one lives in Switzerland and the other abroad.

In order to do so, the partner not residing in Switzerland must receive an invitation from the Swiss resident partner, while the legitimacy of the relationship will also need to be proven.

Do I have to quarantine?

On September 14th, people from nine regions in France and from the Austrian capital of Vienna are also required to quarantine.

On September 28th, the list was expanded again – with 15 new countries added as well as several more regions of France, Austria and Italy. Two countries – Kosovo and San Marino – were removed.

Editor’s note: Please keep in mind that this article, as with all of our guides, are to provide assistance only. They are not intended to take the place of official legal advice.