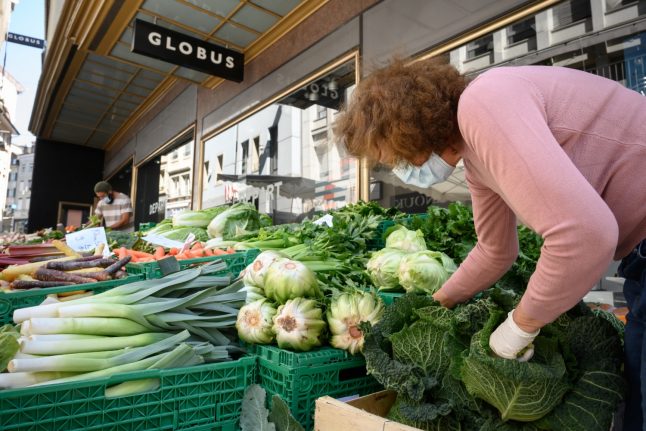 Should masks be made compulsory in shops? Photo: FABRICE COFFRINI / AFP

We reached out to our readers on Facebook to ask if they thought further steps should be taken regarding masks in Switzerland – and if they wore a mask themselves.

On Thursday, July 2nd, the Swiss government announced that the mask requirement on public transport will be enforced from Monday, July 6th.

Masks were not made compulsory in shops or supermarkets in Switzerland on a federal level. Two cantons, Vaud and Jura, have unilaterally decided that masks will be required from Monday onwards.

This was after months of reluctance to put in place such a requirement – despite similar requirements being made compulsory in each of Switzerland’s neighbours. Should masks be made compulsory in shops like they have been on public transport? Photo: FABRICE COFFRINI / AFP

More than 40 people responded to our request for comments, the vast majority of whom said they wore masks in public places – and felt masks should be made compulsory in all shops and stores.

Jeff Schiemann said “If you have to wear pants to go out… you should have to wear a mask. No shirt No shorts No shoes No mask no service… for public health and safety reasons.”

Anton Kondraschov said an earlier mask requirement would have curbed the current increase in new infections.

“Enough with tooth fruity recommendations – take the bull by the horns and enforce masks everywhere, plain and simple. If the easing of measures would have been accompanied by mandatory mask regime we would [definitely] not be seeing the growing statistic.”

Marianne Jaccottet said “All you non-maskers are very selfish! A mask doesn’t only save you, but saves others from you.”

While plenty of readers were in favour of requiring masks in shops, others identified nightclubs as an important factor.

Martin Vondruska said “They opened nightclubs… and shopping with masks is a topic?”

Veronika Marjansdottir Cencen wrote “Before we start this mask hoarding business I think night clubs need to be shut down since they seem to be the problem.”

Victoria Wirz replied “Yes, I always wear a mask in shops and supermarkets. And close those nightclubs”.

Before the mask requirement, Switzerland recommended residents wear masks only where social distancing was not possible.

Some of our readers took still abide by that suggestion. While one reader Zeyno said she “will not shop anywhere that is requesting a mask” and another named Michelle pushed a conspiracy theory narrative, this was not the norm.

However, plenty said they felt social distancing was enough to prevent transmission of the virus.

Tonya Riehl wrote “Depends how full the parking lot is and the size of the store. If physical distance will be hard I wear the mask, if not no mask.”

Rachel Pouso wrote “Yes – they should be compulsory in all enclosed public spaces. If distances cannot be kept outdoors then I think it’s also necessary.”