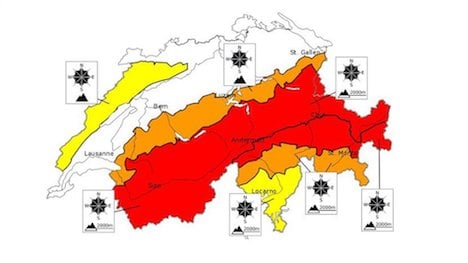 Pielmeier said there had been over a meter of new snow in the canton of Valais over the past three days, and half a meter had fallen on the north side of the Alps.

In addition, storm Burglind that hit Switzerland with force on Wednesday had caused layers of snow to shift.

The researcher said more snow – between 50 and 70 centimeters – was expected to fall in the Alps on Thursday and the strong winds would continue.

A further concern was that the snow line was expected to rise to 2,000 meters over the course of Thursday.

This meant that the new snow at lower levels could be saturated with rain and become unstable.

“The avalanche situation is very dangerous in many parts of the Alps at the moment,” Peilmeier said, warning that major avalanches could come down into the valleys.

She warned that the high level of risk will remain at least until Friday.

The threat of avalanches has closed train lines over the Furka and Oberalp passes in Valais, Blick reported.

Storm Burglind caused wide scale weather chaos and damage as it swept across Switzerland on Wednesday with gusts of up to 130 kmh in low-lying areas.

The end of #Christmas – #Bern? blown away by #Hurricane #Burglind, bashing #Switzerland with winds up to 195kmh – 121mph on #Pilatus mountain
(?:@tagesanzeiger) pic.twitter.com/DdNf2maooz

Around 70 takeoffs and landings were affected at Zurich airport and numerous train lines were disrupted.