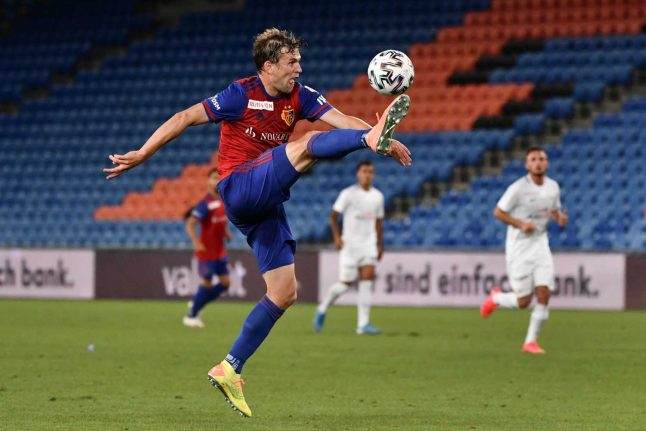 How will the pandemic continue to impact sports in Switzerland? Photo: FABRICE COFFRINI / AFP

The decision to extend the ban by a further month caused the immediate cancellation of the world cycling championships, while the Swiss ice hockey and football championships, desperate for spectator income, were forced to rethink the start of the season.

The Swiss government “intends to ensure that the epidemiological situation in Switzerland does not deteriorate”, it said in a statement.

“This careful reopening step takes into account the needs of society and the economic interests of sports clubs and cultural venues.”

It began gradually easing its restrictions in stages, from April 27.

The ban on events for more than 1,000 people was due to expire on August 31 but has been extended for another month, with the government spelling out the conditions in which they could return.

“Strict protective measures will apply and the events will have to be authorised by the cantons, taking into account the local epidemiological situation and their contact-tracing capacity.”

The one-month extension triggered the cancellation of the world cycling championships, due to take place from September 20-27 in Aigle-Martigny. “Because of this, it is impossible,” said organisers, who are now considering options in other countries.

The Swiss Football League said it had wanted the restriction lifted in time for the September 11 planned start of the season, “and must therefore reconsider the scheduling of the first league matches”.

The SFL is eyeing a return of supporters with no standing sections, no away fans, compulsory masks, safe capacity limits and regulated entry and exit flows.

SFL chief executive Claudius Schafer said lifting the restrictions was of “existential importance” to clubs. The Swiss Ice Hockey Federation said clubs would meet on Friday to decide when to start the season.

Matches from October with more than 1,000 spectators “is the pre-requisite for economic survival”, said a statement on the SIHF website.

“However, with the partial use of stadium capacity, the financial situation of professional clubs remains tight and losses are foreseeable.”

Nonetheless, “the joy of playing ice hockey in front of fans again prevails and we firmly believe the championship can be staged successfully and safely.”

Some 37,079 people have tested positive for the new coronavirus in Switzerland, a country of 8.5 million people, while 1,713 have lost their lives.

Daily infection rates plunged from over 1,000 in mid-March to a few dozen between mid-May and mid-June.

They have since risen, with 273 new cases announced on Wednesday — a level not seen since mid-April. Meanwhile face masks will be made mandatory on all flights in and out of Switzerland from Saturday.