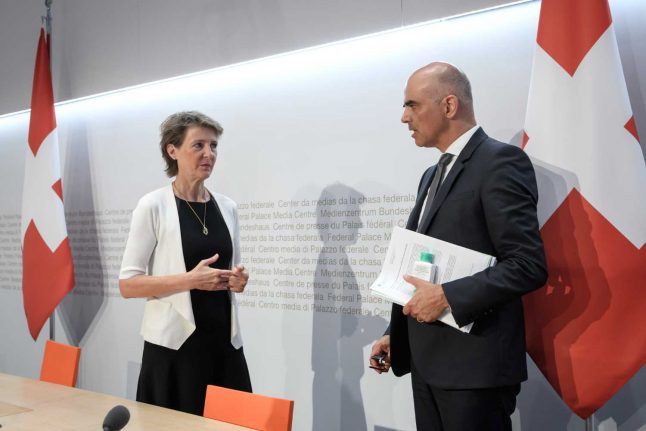 The decision to hold the meeting comes amid rising infection rates across the country.

Swiss media outlet Tages Anzeiger reports the ‘crisis summit’ is set to be “an exchange” between leaders of Switzerland’s cantonal authorities and the federal government.

The meeting is set for Tuesday afternoon, with the results of the summit to be announced on Tuesday evening.

Stay tuned to The Local Switzerland for updates from the meeting, including whether any federally coordinated lockdown measures will be implemented.

In the past few days the number of coronavirus infections in the country has exceeded 200 a day, rising nearly twofold from previous weeks.

That is a substantial rise from the month of June, when the count for daily cases was in the low two- digits.

“The increase is significant. We were a little too confident,” Jacques Fellay, a member of Switzerland’s Covid-19 Task Force told the Swiss media.

According to Fellay, if the numbers continue to soar, the country “will experience a very complicated autumn and winter”.

“We are on a dangerous slope,” he said.

Fellay added that the current number of infections must decrease before the start of the cold season, which is more favourable to the spread of the virus.

As people tend to spend more time indoors during cold weather, the number of infections is expected to soar.

“The large outbreaks that have been identified so far happened essentially in closed places,” he noted.

And if the situation continues to worsen, a return to confinements cannot be ruled out, Fellay pointed out.

“In Switzerland, we can very well imagine confinements in the coming months targeted on a region, a city or a village,” he said.

Such a scenario is likely to happen if the number of daily cases exceeds 300 within a month.

The only way to prevent the surge in numbers, Fellay said, is to wear a mask and avoid large gatherings until the arrival of a vaccine, which could be ready sometime in 2021.

Meanwhile, the Swiss government has announced this week that it will allow gatherings of more than 1,000 people as of October 1st.

“Strict protective measures will apply and the events will have to be authorised by the cantons, taking into account the local epidemiological situation and their contact tracing capacity,” authorities said.

Health officials are also worried that the spread of Covid-19 will coincide with the flu season, which usually hits in fall and winter.

According to Giorgio Merlani, Ticino’s cantonal doctor, “The flu can have a severe impact on the capacity of hospitals. We cannot afford it this winter as a second wave of coronavirus arrives.”