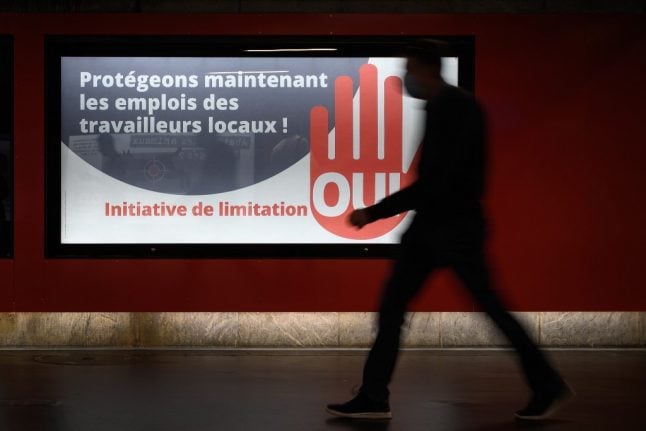 A picture taken on September 1, 2020 in Lausanne shows a backlit electoral poster that translates from German as "Protecting the jobs of local workers now" to advertise a right-wing Swiss People’s Par

On Sunday, Swiss voters will head to the polls on the country’s migration limitation initiative.

While polling indicates it is likely to fail, the proposal – which has been put forth by the far-right Swiss People’s Party – will have wide reaching consequences for foreign workers and for Switzerland in general should it pass.

POLLING: How will Switzerland's autumn referendums turn out?

The ‘moderate immigration limitation initiative' will restrict EU freedom of movement in Switzerland.

There is significant uncertainty about the result. The EU may seek to avoid fighting on two fronts by adhering to some or all of Switzerland’s demands in the midst of ongoing Brexit uncertainty, or it may react by tearing up other agreements between the Alpine nation and the bloc.

These agreements have a range of economic and social benefits for Switzerland, meaning that any significant change may bring about far-reaching consequences.

Michael Siegenthaler, a Labour market specialist at KOF Swiss Economic Institute in Zurich told The Local that even if the vote failed, it was unlikely to be the end of the issue from the point of view of the SVP.

“It’s not unlikely that something similar would happen again,” he said.

“I mean it's speculation but probably yes. If you really look at it, it states in our constitution that we (are to) regulate immigration by ourselves.

“The referendum that was accepted in 2014 said that we have to regulate immigration independently of the EU. Everyone is aware of that, obviously, that we didn’t fully implement the 2014 initiative.”

Here are three possible outcomes if the vote passes.

An outcome which will please the Swiss People’s Party, advocates of the referendum will hope that the EU will allow Switzerland to tear up the freedom of movement rules while remaining in other beneficial treaties.

There are six further bilateral arrangements between the EU and Switzerland, all of which are subject to a so-called ‘guillotine’ clause, whereby invalidating one would invalidate all.

While the EU would have the option to sign these agreements again, the wisdom of allowing Switzerland to retain its beneficial arrangements without committing to free movement of persons may be questioned.

Sean Müller, an Assistant Professor at the University of Lausanne who specialises in Swiss and comparative federalism, territorial politics and direct democracy, says such an outcome is unlikely – particularly amid the ongoing Brexit negotiations.

“How will the EU react from the cancellation of this treaty? The EU doesn’t have to cancel all the treaties – it could cancel the bilateral arrangements, but then sign them again and say “we really want to give Switzerland access to the single market even without this treaty” – but I think that is completely illusory.” Müller told The Local.

“But the EU would set a very bad example for the Brexit negotiations, allowing Switzerland to cherry pick even more.

“We are already cherry picking, but to allow us to do so even more? Then we are in the land of the cuckoo cloud.”

2. Freedom of movement ends along with the other bilateral treaties

Although the bilateral treaties bring benefits both to Switzerland and to the EU, the EU may contend that freedom of movement is of such importance that the other agreements must not be revived.

If the agreements were severed, Swiss businesses would likely bee placed at significant disadvantage – particularly those which operate exclusively out of Switzerland – and would relocate abroad.

Economiesuisse board member Peter A. Gehler told 20 Minutes “A ‘yes’ (vote) would destabilise the relationship with the EU for a long time. The EU will not be ready to move away from the principle of free movement of persons.”

“There would be an ice age between Switzerland and Brussels for years. Contracts would no longer be updated, the framework agreement would be off the table. At most there would be ad hoc solutions.”

Martina Mousson, from political research agency GFS Bern, said the impact for workers would be devastating, regardless of whether or not the associated bilateral agreements were maintained.

“If it passes, the implication is that we need to split with the EU – the bilateral agreements would need to be annulled,” Mousson told The Local.

“This means that people would not be allowed to work in Switzerland – in the long run. There would be drastic impacts for these people who are living here and working here.

“It would be a significant outcome for them personally – and for Switzerland. A lot of them are doctors, for example, as we don't have enough doctors in Switzerland.

“Switzerland are going to miss these skilled workers (if the referendum is successful).”

Although the severing of the above arrangements would be significant, it is not the most severe step that the EU can take.

Other agreements, such as the Dublin immigration agreement or even the Schengen agreement may be also in jeopardy, particularly if the EU hopes to send a message to other nations thinking of leaving the bloc.

Further agreements such as those relating to security and asylum may also be at stake, although most observers and commentators argue that this is unlikely.

The third possible outcome of a ‘yes’ vote is that the Swiss government make like 2014 all over again – and try and water it down upon implementation.

As The Local wrote at the time “Swiss parliament has finally decided how to deal with the February 2014 ‘against mass immigration' referendum, even if its solution bears little resemblance to the text of the initiative voted for by the public back then”.

Mousson told The Local this angered the SVP and led to the current vote.

“The referendum is kind of a consequence of the vote in 2014. There has been the vote on this mass immigration – a narrow yes – along with 2016’s Durchsetzungsinitiative (Enforcement Initiative) but the second failed” she said.

“So that’s why we are voting again, to have the free movement of people annulled – which has been their goal for ten years and why they are coming again with this vote.”

Müller argues that such an outcome is unlikely, not just because of the impact of last time but also due to the text of the current referendum.

“One of the reasons it passed in 2014 was because it was very vague. It said we should introduce quotas on migration, but it didn’t say how high the quota could be. So (voters) could signal that they were unhappy with the government while not doing anything concrete,” Müller told The Local.

“In 2014 the government complied with the referendum text, but it did not honour the spirit of the vote.

“That was one of the reasons that the SVP (held the new vote). But by being so specific now, they have cut out the protest vote. The SVP will lose a lot of votes because they are so precise.”