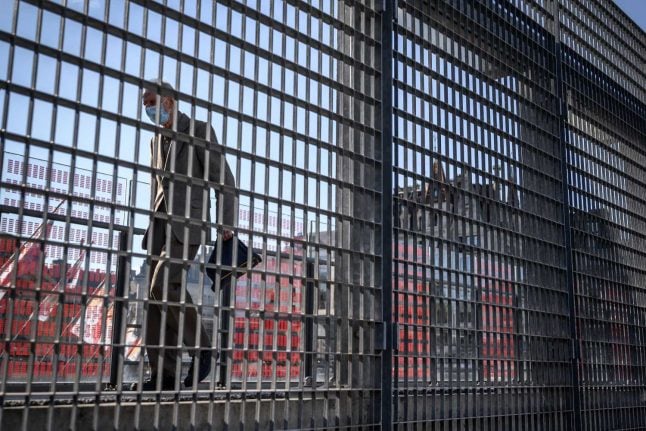 A man walks behind a steel grate in Vaud. Photo: FABRICE COFFRINI / AFP

As a result, the French-speaking canton has adjusted its testing regime.

Swiss daily 20 Minutes reports that people with with symptoms of a common cold – as well as some of the less common reported symptoms of the virus – will no longer be tested.

People with muscle pain, headaches, runny nose, general fatigue or stomach problems will no longer qualify for a test.

Doctors in the canton will still have the power to order a test on a discretionary basis, however.

“Less typical symptoms only require a test if there has been contact with a positively confirmed case,” the cantonal government wrote on the updated website.

The change came through on Thursday, October 8th, reports 20 Minutes. The cantonal website did not provide a reason for why the change was adopted, however cantonal authorities told 20 Minutes that the testing regime was not being relaxed.

Instead, authorities said the goal was to reshape the testing regime to find more positive cases.

“The goal of the test strategy is to test more specifically in order to find more positive cases. Over 90 percent of people who have become infected develop typical symptoms,” the spokesperson told 20 Minutes.

‘Has the canton given up?’

Experts are critical of the move. Epidemiologist Marcel Salathé tweeted that the decision represented “going in the wrong direction”.

Geneva virologist Isabella Eckerle tweeted that the decision was “very alarming in the current situation. Has the canton already given up in view of the 2nd wave and is now letting it go?”

Eckerle warned that the canton – and the entire west of Switzerland – could be headed for a second lockdown.

On Thursday, October 8th, Vaud set up a ‘Covid-19 Scientific Council’ to provide scientific advice on the pandemic.

As noted by Le Temps, “the concrete role of this community is to rely on scientific knowledge and expertise in order to formulate recommendations to the canton. It will also have to assess the measures provided for by it and propose specific actions.”

Also on Thursday, cantonal authorities told hospitality venues to shift to digital means of contact tracing due to “reliability problems” with the existing paper-based system.