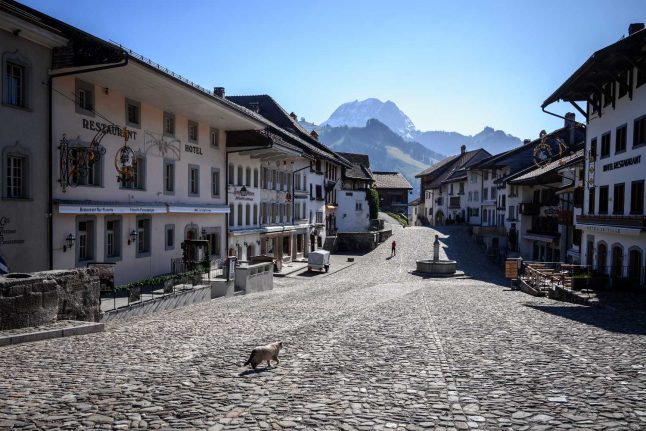 A picture taken on April 14, 2020 shows an empty square in the touristic village of Gruyeres during the COVID-19 lockdown. Photo: FABRICE COFFRINI / AFP

At a press conference on Tuesday, the Swiss government indicated it was weighing up whether to impose a so-called ‘mini-lockdown’ which would act as a circuit breaker for rising coronavirus case rates.

The measure is seen as a way to prevent an even larger lockdown in the future.

Pursuant to the lockdown, public life would be restricted by a short period of time to cut rising case rates.

Kuster said research was being done to determine how effective such a measure actually is in preventing infections – and whether it should be stopped once it has been started.

“(Mini-lockdowns) are happening in some countries now. So-called circuit breakers – they are supposed to break the rise. It remains to be seen what the real benefit will be,” Kuster said at Tuesday’s press conference.

“At the point in time you stop (the lockdown), you may not see any results. I imagine it will be difficult to stop the lockdown if the infections have not yet subsided.”

Epidemiologist Nicola Low from the University of Bern has recommended a mini lockdown to interrupt transmission chains.

“The restriction is less severe for the population because it is for a limited time and the next steps are clearly communicated.”

On Tuesday, the FOPH reported 3008 new cases. Cases in Switzerland are now doubling every week.

There has been an average of 337 cases per 100,000 people in Switzerland over the past two week – significantly higher than the 60 per 100,000 ‘high risk’ threshold imposed for quarantines.

Currently, more than 600 people are being cared for in hospitals due to the coronavirus – 100 of them in intensive care.

There were eight deaths and 53 hospital admissions nationwide.

One of the major concerns about the rising infections was an increasing test positivity rate.

A high test positivity rate indicates that there are large numbers of cases going undetected in the population – and indication that the virus is spreading throughout the community.

The test positivity rate refers to the percentage of positive tests out of a total number of tests.

“The high positivity rate has many causes. That can mean that you test more specifically and thus find more cases. It can also mean that not all of them can be tested,” Kuster said.